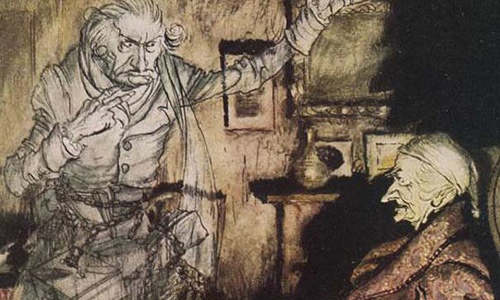 “Marley was dead to begin with.”  These six words may be, at least, one of the most famous lines in all of literature.  In 1843 Charles Dickens was short on funds.  In order to help himself make the money he needed he came up with the idea of a Christmas book.  He was considering the circumstances of the poor and how to get a message out to the people about the circumstances of the poor and how to help.  Thus was born A Christmas Carol.

The book took Dickens 6 weeks to write and he enjoyed every minute of the work.  When he was done he decided to publish it on his own.  He designed the cover as chose the illustrator, John Leech.  He opted to have 6000 copies printed, which at the time was not a small number.  The book was released December 17, 1843 and with in four days all the copies were sold.  The book was printed again and has not been out of print since its publication.

A Christmas Carol is not written in chapters but in staves as in the lines of a song, Dickens Carol has five staves.

The first stave of A Christmas Carol is Marley’s Ghost. In this Stave we meet our main Character Ebenezer Scrooge.  It is interesting to note here that name Ebenezer has a biblical meaning.  When the Hebrew nation won a battle against their enemies with God’s help they were instructed to set up an Ebenezer stone.  This stone would mark the place where God delivered them from their enemies.  In so doing they were to remember who delivered them.  So the name Ebenezer in a way means something to remember what God has done for you.

Scrooge himself was described by Dickens as a “tight fisted hand at the grindstone, Scrooge!  A squeezing, wrenching, grasping, clutching, covetous old sinner!…and as solitary as an oyster”.  So immediately we find out that Scrooge hoarded money, he wanted what others had, and he held on to it.  He didn’t want others around him unless absolutely necessary.

We learn that Scrooge owns a business and had once had a partner named Jacob Marley and that Marley had died seven years ago that very night, Christmas Eve.  We also find out that on the day of Marley’s funeral Scrooge made a bargain with the undertaker so funeral would be cheap.  We later find that Scrooge was Marley’s heir and took everything that belonged to his dead partner.

In the first stave we meet Scrooge’s clerk, Bob Cratchit, who we are to find has a wife and five children, Scrooge pays Bob 15 shillings a week which in the money of the day was about $3.67.  Prices were different in those days but it was still hard to get by on that small amount.

We also meet Scrooge’s nephew, Fred. Who comes to the office to wish his uncle a Merry Christmas.  Fred is Scrooge’s only living relative. He is the son of Scrooge’s sister Fan, who has passed away.  Scrooge tells his nephew that Christmas is a humbug.  Humbug is a deception or something that is false.  Scrooge goes on to say that “anyone who goes about with a merry Christmas on his lips should be boiled with his own pudding ( an English Christmas dessert) and buried with a stake of holly through his heart.”  Scrooge’s nephew is appalled by his uncle’s words.  Fred tells Scrooge that Christmas is a warm, charitable time. A time when “men open their shut up hearts freely and think of people below them as fellow passengers to the grave and not another race of creatures bound on other journeys.”

It is interesting to note here, though Dickens never outright says that Christmas is the birth of Jesus, he often alludes to it.  When Fred first begins to talk about Christmas he says, “ I have always thought of Christmas-time, when it has come around – apart from the veneration due to its sacred name and origin, if anything belonging to it could be apart from that.”  Fred is telling Scrooge that Christmas is a day that is sacred and a day to be venerated because of the birth of Jesus.  He also questions whether anything belonging to Christmas can be separated from Christ’s birth.

Scrooge immediately shuts his nephew down and refuses to hear any more of it.  Fred even invites Scrooge to Christmas dinner, to which Scrooge replied in the vernacular of the day, that he would see his nephew in hell first.  Scrooge’s nephew never loses his good cheer and as he leaves he wishes his uncle a merry Christmas and a happy New Year.

When Scrooge’s nephew leaves two more gentlemen visit Scrooge.  They are there to collect money for food and drink and means of warmth for the poor.  They tell him that this time of year “want is keenly felt, and abundance rejoices.”  It is the same with us today.  People can be in all kinds of want at Christmas time.  Sometimes it is for material goods like food and clothing.  Sometimes it is for other types of needs like loneliness and depression.  If we have lost someone during the year it is at Christmas that the loss is felt more deeply.
But we must also remember that men stated that “abundance rejoices”.  In other words people come together to help the poor this time of year.  Donations of toys and clothing and food and money are distributed.  The Salvation Army can be seen collecting money for those in need in many places and they use this money to help care for others all year.

Scrooge’s answer to these men was to the point; he tells them that if there were people in need they should go to poor houses and work the treadmill.  Both were very horrible places and few wanted to go there.  Families would be separated with no guarantee that they would see each other again.  The work was hard and degrading.  Scrooge told the men that he paid taxes for these places and he would give no more to help them.  He states that these people must go there.

One of the men responded that “Many can’t go there and many would rather die.”  Scrooge’s answer to that was that” if they would rather die they should do it and decrease the surplus population.”  These words he would later regret.

The two men after hearing left the office.  The hour of closing came around and Scrooge reluctantly let his clerk know this.  Before he left the office Scrooge grudgingly gives his clerk Christmas day off, but with the stipulation the clerk should come in early the next morning.
Scrooge has dinner and goes home to the house that used to belong to his partner, Jacob Marley.  It is when putting his key into the door that Scrooge sees Marley for the first time as knocker turn into Marley’s face.  Scrooge does not accept what he sees and goes in to the house.  Once entering the part of the house he occupies, he double locks the door and checks all around the room to make sure everything is as it should be, he is a little nervous about what he has seen though he won’t admit it to himself.

As Scrooge sits down by the fire to take a bit of gruel, a very watery oat meal with a lot of milk, some butter and few oats, bells start to clang in the house and then Scrooge hears chains coming up the stairs and towards his door and then enters the Ghost of Jacob Marley.
Scrooge does not believe what he is seeing.  He blames it on indigestion and tells Marley that he is a bit of cheese or under cooked beef, or a blob of mustard.  At this the ghost raises and shakes his chains and gives off a terrifying howl.  After this Scrooge unwillingly believes in what he is seeing.

Marley tells Scrooge that he, also, is wearing a long chain like Marley’s but bigger as Scrooge has had seven more years to work on it.  He goes on to say that the chain is forged in this life if we ignore the need to help others and he admits this was his failing and he will now regret it for all eternity.

Marley asks Scrooge, “Why did I walk through crowds of fellow beings with my eyes turned down, and never raise them to that blessed star which led Wise Men to a poor abode?  Were there no poor homes to which its light would have conducted me?”
In essence Marley was asking Scrooge a question that Scrooge could not answer, as Scrooge lived the same way.  Always looking down and keeping himself to himself.  Never wondering about or caring for anyone else beyond himself.  Totally self absorbed. This is why Marley had come.

Marley tells Scrooge that he has been able to get Scrooge a chance to escape his doom.  He tells Scrooge that he will be visited by three Sprits, and that without their help Scrooge could not be saved.  Scrooge tells Marley that he would rather not have these visitations.  But Marley really doesn’t give his ex partner a chance to refuse and tells Scrooge that the first spirit will come tomorrow when the bells tolls one, the second the next night at the same hour and the third the following night when “the last stroke of twelve ceases to vibrate.”
Marley then leaves Scrooge by walking backward toward the window as the window slowly raises itself.

Marley beckons Scrooge to look and when Scrooge does he sees many Spirits outside all roped around by chains and all suffering as they cannot help a poor woman and a child shivering in the outside cold.  Scrooge on seeing this cannot take anymore and runs to his bed covering himself in fear.

Marley has done much for Scrooge.  These days we would call his work an intervention.  An intervention is when a group of friends gather together to help you see where you are messing up your life.  This could an addiction area or trouble in your home or in your marriage.  Of course this kind of help does not have to be done in groups.  Real friends will tell you what you need to hear when you need to hear it.  A friend like that is not one to get angry at but one you should treasure.

At the end of Harry Potter and the Sorcerer’s Stone Professor Dumbledore gives Neville Longbottom 50 extra points for his house because Neville had the courage to stand up to his friends, which is harder to do that to stand up to your  enemies.
So what about us?  Are we looking down, not noticing the suffering around us.  Do we hoard what we have instead of helping others?  Are we so self centered that we cannot see a friend that has a need?  These are the questions we should ask ourselves as we close the book on Stave one of A Christmas Carol.