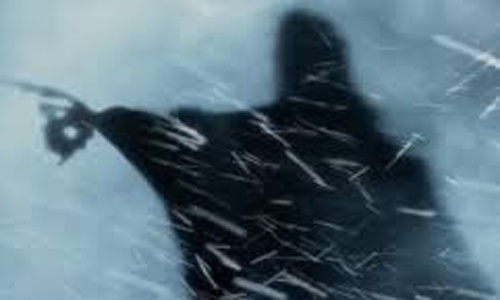 Stave 4, The Last of the Spirits.  The last stroke of midnight had  cease to vibrate and there appeared before Scrooge a figure “shrouded in a deep black garment, which concealed its head, its face, its form, and left nothing of it visible save one out stretched hand.  If the hand wasn’t there it would have been hard to see the difference between the phantom and the night.  For the preceding three installments of this series click here.

Scrooge bent down on his knee.  Now he was terrified.  He asked the spirit if it was the Ghost of Christmas yet to come and if it would show him the future? He got no reply from the spirit, just a barely visible nod of its head.

Scrooge exclaimed “Ghost of the Future, I fear you more than any spectre I have seen.

This phantom that appears to Scrooge is the most frightening part of A Christmas Carol.  A black shape with a just a hand showing would terrify most of us.  Scrooge, had, however, seen his past and the wreck he had made of his life.  He had seen his present where he is figure of fear and pity and now he is to see his future.  Now he knows he is to see the consequences of his actions, and he is rightfully afraid.

Pause here and take this in.  Do we stop and think about what will happen if we do something? If our actions bring only good to ourselves and possibly evil for others?  This what Scrooge now confronts.

The Spirit says nothing, but only points.  Scrooge finds himself in the city.  The spirit points to a group of men and Scrooge goes to hear their conversation.  Scrooge hears them speak of the death of a man that they didn’t really like.  They consider going to the funeral as they cannot think of anyone who will attend.  One even makes a joke of it saying that he will only go if a lunch is provided.  The only thing they wonder about is who will get this man’s money.

Then the spirit then points to two other men and one simply says “Old scratch has got his at last.”  The other man agrees.  Old Scratch is another name for the devil.

Scrooge does not understand why he is being shown these conversations.  He wonders what they could possibly have to do with him.  He does notice however one strange thing, the place where he usually stands is occupied by another man.  But he found hope in this has he had begun to think of changing his life.  He thought this was the evidence that proved he had done so.

Next the phantom took Scrooge to a beetling shop.  A beetling shop in Victorian London was like a resale shop today.  People would bring in their used things and get a small profit for them.  We use E Bay or Amazon to do most of that today though there are still some of these types of shops around.

The place that phantom took Scrooge was not good.  It was situated in a bad part of town and was broken down.  Three people arrive at the shop simultaneously, a laundress, the undertaker’s man, and a char woman.  A charwoman is a woman employed to clean houses or offices.  All three had come to the shop to sell items they stole from the room of a man who had died.  There was no one in the room to look after the body and so the charwoman even stole the shirt the dead man was wearing, as well as his bed curtains.

This group of people felt no remorse for what they stole.  He was called a wicked old screw and unnatural in his lifetime.  An old screw was slang for a miser.

At the end the charwoman stated, “He frightened everyone away when he was alive, to profit us when he was dead.”  She then laughed.

Not so long ago it was the custom to lay a dead person’s body out in his or her home, instead of a funeral parlor.  Relatives and friends would then come and visit the mourning family members and offer support and bring food or flowers to those who were grieving.

This dead man being referred to by so many was laid out on the bed of his home but no one was grieving for him and no one came to visit and so the laundress, the undertaker’s man and the charwoman could all steal what they wanted, even the very shirt off the dead man’s back.

Next the phantom took Scrooge to a room that was so dark that Scrooge could not see his surroundings.  He could, however see a curtain less bed with a dead figure lying upon it; the figure was completely covered with a sheet.  The Ghost of Christmas Yet to Come pointed to the head indicating that Scrooge was to pull back the sheet and reveal who the dead man was.

Scrooge looked in horror at the dead man and told the spirit that he had “not the power” to do what the Spirit was asking of him.

Scrooge then asked if he could be taken to a place where some emotion could be seen regarding the man’s death.  All Scrooge had seen so far was coldness towards the dead figure.

The phantom then took Scrooge to a place where a young couple was seen.  The husband had found out about the man’s death and the couple felt emotion, but the emotion was relief as the couple owed the man money and they would now have time to repay.  The threat of the debtor’s prison had been removed from them.

The phantom took Scrooge to the home of Bob Cratchit.  Scrooge must have dreaded being brought to this house as there is only one death that could have occurred here, the death of Tiny Tim.

Scrooge would have been correct in thinking that the poor crippled child had died.  Here tenderness is shown while the family grieves the loss of a son and a brother.

Bob comes home has he had been out, he had been to the place where Tiny Tim was to be laid to rest  As he comes home he goes upstairs where his child is lying.  This room was not bare as the dead man’s room that Scrooge had recently seen.  In fact “it was lighted cheerfully and hung with Christmas.” Bob sits for a while and goes back down stairs.

Bob gathers his family around him and declares the legacy of Tiny Tim. “I know, my dears,  that when we recollect how patient and how mild he was; although he was such a little, little child; we shall not quarrel easily among ourselves and forget poor Tiny Tim in doing it.”  Even a small child can leave something behind him that will never be forgotten.

Scrooge is next conducted to the area of the city where his office was situated.  He begs the Phantom to be allowed to go and look at his place of business.  He wants to see what he had become.  The spirit points in another direction.  This is the one time in the book where Scrooge disobeys his ghostly companion and goes to look in the window. “It was an office, but it was not his.  The furniture was not the same, and the figure in the chair was not himself.”

Scrooge walked away bewildered.  What could have become of him?

The phantom then led Scrooge to an old unkempt graveyard.  Weeds grew there, you can imagine that there were rats also as Dickens would later use that image of a grave yard in his book Bleak House.

The phantom points its finger, the only visible part of its body to a single grave.

He still gets no reply.  The finger continues to point.

Scrooge still cannot go the grave, he begs the spirit, “Men’s courses will foreshadow certain ends, to which if persevered in, they must lead, but if the courses be departed from, the ends
will change.  Say it is thus with what you have shown me?”

Here  Scrooge is even more terrified as the phantom stays as silent as ever, and worse than that points to Scrooge and then to the dismal gravestone.  Scrooge trembling approaches the stone and reads on it what he has feared it will say,

Only the author himself can best describe what happens next.  “Spirit, Scrooge cried, hear me I am not the man I was.  I will not be the man I must have been before this intercourse… I will honor Christmas in my heart, and try to keep it all the year.  I will live in the past the present and the future.  The spirits of all three will strive within me.  I will not shut out the lessons that they teach.  Oh, tell me I may sponge a way the writing on this stone!”

“Holding up his hands in a last prayer to have his fate reversed, he saw an alteration in the Phantom’s hood and dress.  It shrunk, collapsed, and dwindled down into a bed post.

In science fiction and comic book stories the future is dealt with in different ways.  Many of them, however, seem to subscribe to the idea that the future is always in flux.  One set of circumstances can be changed if different choices are made.

We are much the same way.  Our future is directly dependent upon what we choose to do today.  If we eat that second piece of cake today in the future we may gain weight.  If we decide not to start a savings account and we lose our jobs we will have no money to support our selves.  If, as in Scrooge’s case, we become miserly and mean we will die unloved and alone.  Certain actions today bring consequences good or bad tomorrow.

This is a time to ask ourselves questions.  What things are we doing now, that will affect our future for good or for evil?  What should we change today in order to have a better tomorrow?

It is not only the things we do, but it is the things we don’t do.  When we find we have a choice before us and we do not make a choice, we have in essence, made a choice.  Edmond Burke, an author and an Irish statesman in the 1700s, once said, “The only thing necessary for the triumph of evil is for good men to do nothing.”

That is a powerful statement especially for today as we grapple with so many issues, war in foreign countries, the illegal use of drugs, abuse of children and the elderly, shootings in schools and other public places.  If we make a choice to do nothing and allowing these things to go on, even if we are good, evil will continue to flourish.  Even the smallest action like choosing to vote or shoveling the walk for an elderly person in the winter has the possibility of changing the world.