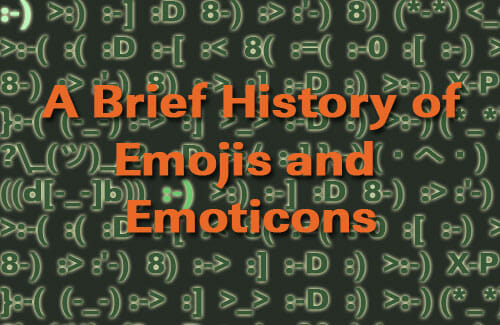 Level 1 – The Emoticon
Emoticon is actually short for EMOTION ICON, and was started by using punctuation marks with letters and numbers to express feelings, happy, sad, angry; they started with the simple statements. A man named Scott Fahlman is credited with the modern emoticons, on a Carnegie Mellon University message board on September 19, 1982. There were similar ideas references in the late 1960s/early 1970s, but not clearly stating the intentions of the writers.

19-Sep-82 11:44 Scott E Fahlman 🙂
From: Scott E Fahlman <Fahlman at Cmu-20c>
I propose that the following character sequence for joke markers:
🙂
Read it sideways. Actually, it is probably more economical to mark
things that are NOT jokes, given current trends. For this, use
🙁

Until some definitive evidence comes down, Scott’s statement pretty much stands. “I’ve never seen any hard evidence that the 🙂 sequence was in use before my original post, and I’ve never run into anyone who actually claims to have invented it before I did,” Fahlman wrote on the university’s Web page dedicated to the smiley face. “But it’s always possible that someone else had the same idea — it’s a simple and obvious idea, after all.”
The winking semicolon was probably the next step, and since then, it’s become a language of it’s own. Their are references going back to the 1600s, but emoticons really don’t count unless they are used with a typewriter, or at least not hand-written. A hand written emoticon is just a doodle. 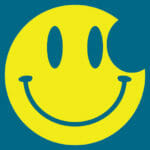 The basic Smiley Face was created in 1963 by an artist named Harvey Ball. The Pop Culture Madness Logo is a play on that, the smiley with a bite taken out of it.
Now there are dozens of “Western Emoticons” and an additional of “Eastern Emoticons”. Generally the Western Emoticons are read side ways like 🙂 and Eastern Emoticons are read straight up like (-_-).
Level II – The Emoji
Emoji were invented in 1999 by Shigetaka Kurita, to be used among Japanese computer enthusiasts, and Apple introdcued them to the West with the first iPhones in 2007.
Once texting became a thing, the emoticons and internet slang like LOL or BTW became a quicker way of expressing a thought. They are also important because quick text messages can come across as cold or even terse. That little smiley emoji 🙂 or LOL can reassure a reader that you are not mad. But if you are angry, you can make that clear with the Angry Face Emoji. >:-(
There are hundreds at this point, but one of the most popular is the POOP Emoji.????
The icon is a character in 2017’s The Emoji Movie, voiced by Patrick Stewart.
Level ∞ – The Mystery

There is some evidence that Abraham Lincoln may have created the first emoji. In an 1862 edition of the New York Times, a transcript of a speech by President Lincoln offered the first few lines. This was before the era of typewriters*, and the type used for printing was manually set, so a “typo” is very unlikely. The are two reference point for and audience reaction using brackets [applause] and {Renewed applause], but the ‘laughter’ reference was in a parenthesis, and ended with a ; ).
Was it Lincoln who forwarded the finished text to the newspaper? Was it the newspaper editor adding some flair? Was it a printer error?
Or was it the first emoji?
*Rutherford B. Hayes brought the first one to the White House in 1880.
Wikipedia List of Emoticons
The Big List of Emojis.