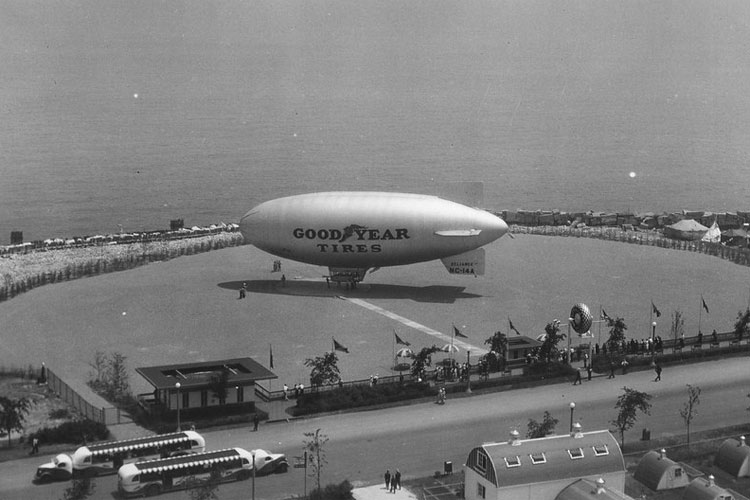 In the late 1700s, there was a major change in a lot of people’s perception of the world. It was the end of the Age of Enlightenment and the Start of the Industrial Age. Call it The Age Before Pop Culture. People were doing more than just just thinking what was possible, they started thinking about what was IMPOSSIBLE – flying…

There was no electricity nor engines, so that narrowed the choice to balloons, and there were and still are two types of balloon travel – Hot Air and and gases like Hydrogen and Helium. The earliest flights were with Hot Air but they also experimented with Hydrogen (and later Helium) , the lightest gases. The negative side of floating with Hydrogen is that it is volatile and very flammable, and aviators mostly stopped using hydrogen with the Hindenburg Disaster in 1936, but other airships kept flying…

The Most Famous Airship in America is the Goodyear Blimp
The Goodyear Blimps (3 of them right now) are filled with helium. Goodyear started with hot air balloons in 1910 and launched their first blimp in 1917. At that time, Cars were new, tires needed to be replaced- a lot, and the Goodyear Blimps were one of the most successful advertising campaigns on all time for Brand Recognition. Goodyear has had over 20 different models through the years.

Seeing a Goodyear Blimp today is always an event. People point, take pictures, and bring it to the attention of their friends. Today, we’re used to looking at the sky – people can tell what type of aircraft they see, and if its unusual, it catches our attention. Image you saw an actual, up close, big as life real UFO, OR Imagine, 200 years ago, and you never saw an airplane or a blimp, or anything in the sky before, and you suddenly see a Giant Floating ball, with some guy under it in a basket…

America’s First Balloon Flight
On January 9, 1793,  Jean Pierre Blanchard made the first successful hot air balloon flight in the United States, from Philadelphia, PA to Woodbury, NJ. This was an event! When he took off, his witnesses included President George Washington and future presidents John Adams, Thomas Jefferson, James Madison and James Monroe. Ben Franklin passed away 2 years earlier-  he would have wanted to be there too. But imagine if you weren’t in Philly to see the takeoff, but were in New Jersey, where this thing landed.

Jean Pierre was like an Evel Knievel of his time. Another Frenchman had invented The Parachute, basically French for ‘avert the fall‘, and Jean Pierre demonstrated that you could safely get out of a hot air balloon, by using a dog, with a parachute.  In 1793, he may have been the first human to need a parachute when his balloon broke! He said it happened, but there were no witnesses.

Blanchard wasn’t the first Frenchman to toy with Hot Air Balloons, that distinction goes to Joseph-Michel and Jacques-Étienne Montgolfier, who developed a hot air balloon in Annonay, Ardeche, France and demonstrated it publicly, unmanned, on September 19, 1783. By October, manned flights started taking place.
The first military use was in 1974, for The Battle of Fleurus.

On December 17, 1903 Orville and Wilbur Wright successfully flew the first heavier-than-air controlled flight near Kitty Hawk, North Carolina. During this time, people were attempting mechanical controlled flight, so others have claimed to “invent” heavier-than-air travel. The brothers ran a bicycle shop, and were tinkerer/ inventors, and not in a position to build a large industry/company that airplanes were destined to become. Their patent (#821,393) was actually for the (3 axis) control of the flying machine they built. The first passenger on a plane was their employee, Charles Furnas, on May 18, 1908.

Charles Lindbergh (February 4, 1902 – August 26, 1974)
“Lucky Lindy” was a US Air Mail pilot who was the first to travel solo and non-stop between the United States and Europe (Roosevelt Field, Long Island, New York, to Paris, France). He won the Orteig Prize (plus $25,000) and the United States’ highest military decoration, the Medal of Honor for his efforts. His son, Charles Jr, was kidnapped in March 1932, and it was called The Crime of the Century.