(PCM) On this day we honor the birthday of famed photographer and environmentalist Ansel Adams. Adams is best known for his stunning black and white nature photographs and his work with national parks across the country.

Adams began his career selling photographs of Yosemite National Park in the early 2oth century and eventually fined tuned his photographic style to feature incredibly sharp contrasts and intense exposures. He used large-format cameras to capture his images and was matriculate when it came to overall composition.

Chances are you have spotted an Ansel Adams photo somewhere in your travels as his photos have been widely reproduced in calendars, posters and books. 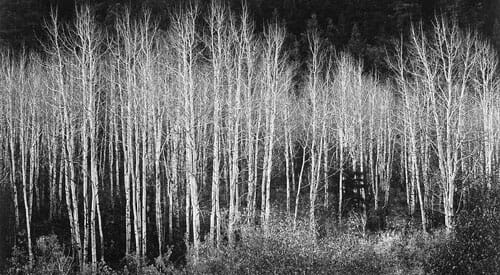 Some of our personal favorite works of Ansel Adams include the stark contrast black and white trees featured in “Aspens” and the majestic waterfall featured in “Bridalveil Falls“.

In celebration of Ansel Adams birthday we have included some fun facts about his life below: