Ator l’invincibile (1982)
Ator goes to avenge the deaths of his fellow villagers at he hands sorcerer/emperor Dakkar, and rescue his sister/bride from the evil regime. Dakkar has ruled for a thousand years with the help, it seems, of less than a dozen horse-riding warriors, who sound like drunken cowboys when they set upon the helpless townsfolk. 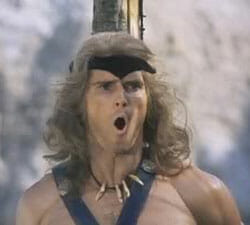 Sample dialogue includes:
Ator: I love you.
Sunya: And I love you.
Ator: Why can’t we marry?
Sunya: Ator, we are brother and sister.
Ator: I’ll talk with our father

The father, upon hearing this from Ator, expresses his happiness since Ator was adopted anyway. Of course we needed this scene for Ator to find that he was the son of Torren (Toren?) and Ator has a destiny to fill and what-not.

His journey includes a walk through the “Forest of the Walking Dead,” but nothing happens there, threatening music notwithstanding. The best action takes place in the well-lit cave where the blind warriors live. He ends up fighting his(?) shadow in the basement. In the mix there is the hot blonde Amazon thief named ‘Roon’ and his Yoda-like trainer, Griba.

Add an ugly witch who casts a spell to look beautiful to our hero and your movie is almost complete.

Outside of the special effects and props, which can be found in any American home, the real star of the film was the cute pet bear cub, with a skunk-like white stripe in it’s head. THAT is what makes film complete.

Starring Miles O’Keefe, best known as Tarzan to Bo Derek’s Jane, this film was written and filmed in a matter of weeks to tread on the success of ‘Conan The Barbarian.’

Aside from the terrible acting, horrific writing and over-reaching grand saga design, there are so many miscues and logic errors that this film is a textbook example of ‘so bad, it’s good.’ 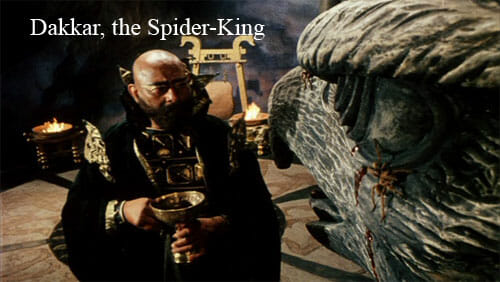