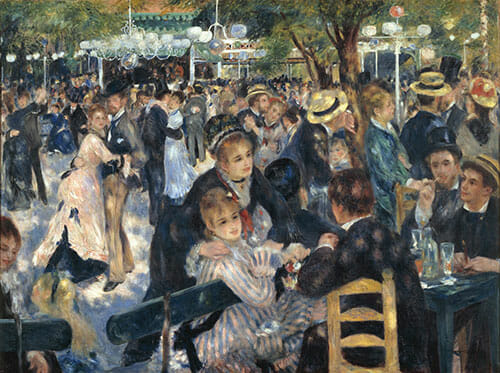 (PCM) “Bal du moulin de la galette” was painted by French impressionist artist Pierre-Auguste Renoir in 1876. It is often considered to be one of the Impressionist painting movements greatest masterpieces. The painting depicts a typical Sunday afternoon at Moulin de la Galette in the district of Montmartre in Paris. In the late 19th century, working class Parisians would dress up and spend time there dancing, drinking, and eating galettes into the evening.

In the very typical Impressionist style the painting captures a moment of real life. A fun fact is that Renoir actually painted two identical versions of this particular painting with the only difference being that one was a much smaller scale version. It is believed to be part of someone’s private art collection in Switzerland. One is presumably a copy of the original, but it is not known which is the original. It is not even known which was the one first exhibited at the 3rd Impressionist exhibition of 1877, because although the painting was catalogued and given favorable attention by critics, its entry did not indicate the size of the painting, information that would serve to identify it

The painting is currently housed in the  Musée d’Orsay in Paris, however prior to that it sold by the widow of a private owner for the amount of $78 US million in 1990. At the time it was one of the most expensive pieces of artwork ever sold.

According to Wikipedia, there are many elite personalities in the painting.  Despite Renoir’s resource of distributing a sought after fashionable hat of the time among his models (the straw bonnet with a wide red ribbon top right is an example of this hat, called a timbale), he was unable to persuade his favorite sixteen-year-old model Jeanne, who appears in La balançoire, to pose as principal for the painting (in fact she was conducting an affair with a local boy at the time). It is her sister Estelle who poses as the girl wearing a blue and pink striped dress. These two girls came to Le Moulin every Sunday with their family; with two younger sisters barely taller than the tables, and their mother and father, properly chaperoned by their mother (entry was free for girls at Le Moulin and not all were models of virtue).

Beside her is a group consisting of Pierre-Franc Lamy and Norbert Goeneutte (also appearing in La balançoire), fellow painters, as well as Rivière himself. Behind her, amongst the dancers, are to be found Henri Gervex, Eugène Pierre Lestringuez and Paul Lhote (who appears in Dance in the Country). In the middle distance, in the middle of the dance hall, the Cuban painter Don Pedro Vidal de Solares y Cardenas is depicted in striped trousers dancing with the model called Margot (Marguerite Legrand). Apparently the exuberant Margot found Solares too reserved and was endeavouring to loosen him up by dancing polkas with him and teaching him dubious songs in the local argot. She was to die of typhoid just two years later, Renoir nursing her until the end, paying both for her treatment and her funeral.

Rivière describes the painting as executed on the spot and that not without difficulty as the wind constantly threatened to blow the canvas away. This has led some critics to speculate that it was the larger d’Orsay painting that was painted here, as the smaller would have been easier to control. On the other hand, the smaller is much the more spontaneous and freely worked of the two.