Birth of Venus by Sandro Botticelli

Birth of Venus was painted by Sandro Botticelli in the mid-1480s. Earlier, an artist named Apelles, according to Pliny the Elder, created a representation of Venus Anadyomene (Venus Rising from the Sea). According to Pliny, Alexander the Great offered his mistress, Pankaspe, as the model for the nude Venus and later, realizing that Apelles had fallen in love with the girl, gave her to the artist in a gesture of extreme magnanimity. 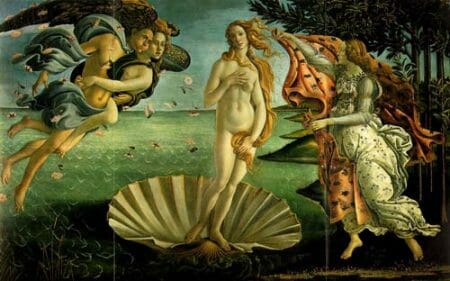 Or maybe it was inspired by hymn published in Florence in 1488 by Demetrios Chalkokondyles:
Of august gold-wreathed and beautiful
Aphrodite I shall sing to whose domain
belong the battlements of all sea-loved
Cyprus where, blown by the moist breath
of Zephyros, she was carried over the
waves of the resounding sea on soft foam.
The gold-filleted Horae happily welcomed
her and clothed her with heavenly raiment
The pose of Botticelli’s Venus is reminiscent of the Venus de’ Medici.