Christmas Trivia and The Reason For The Season

Christmas Trivia and The Reason For The Season
(PCM) The word Christmas originated as a compound word, meaning “Christ’s Mass”. It is derived from the Middle English Christemasse and Old English Cristes mæsse, a phrase first recorded in 1038. “Cristes” is from Greek Christos and “mæsse” is from Latin missa (the holy mass). While it marks the celebration of the birth of Jesus, experts are slightly fuzzy about His actual birth date.

Record-keeping for regular people was virtually non-existent 20 centuries ago and, over the course of this time, two calendars were used – the older Julian calendar and the Gregorian calendar we use today. Basically the Julian calendar was off by 11 minutes a year, which doesn’t sound like much, but after ten, one hundred or a thousand years it can really add up.

In 1582, Pope Gregory XIII kicked his new and better version off, and even that took a few centuries to spread around the world. 170 years after most of the rest of the world changed, in England and its American colonies, the dates jumped from Wednesday 2 September 1752 to Thursday 14 September 1752 within 24 hours.

The Nativity of Jesus
In the village Nazareth lived Joseph and Mary. One night Mary told Joseph she had a dream that an angel came to her and told her she had been chosen to bear the son of God. When the people of Israel were instructed to return to their towns of birth Mary and Joseph set out for Bethlehem; Joseph on foot, Mary on a donkey. It is said they traveled many days and only rested one night, all while Mary was with child. 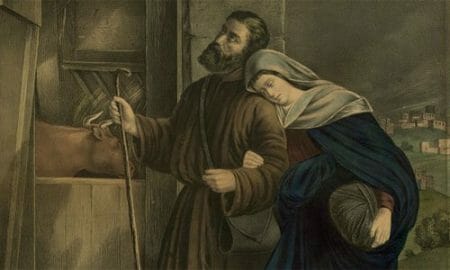 The couple arrived in Bethlehem at night, but there was no where with vacancy for them to stay. One inn keeper directed Joseph and Mary towards a stable room in a cave where they could rest the night. The following night, Mary gave birth to baby Jesus in the stable room.

When the child was born, a bright star shone over Bethlehem, scaring the shepherds. When they tried to run, an angel appeared and told them to not fear and that a savior had been born.

Three kings in the east – Caspar, King of Tarsus; Melchoir, leader of Arabia; and Balthazar, King from Ethiopia – knew the star as a sign and traveled many days and many miles to reach the small stable room in Bethlehem. When the three kings reached Bethlehem, they bowed to the child and presented him with gifts: gold, frankincense (used in perfumery and aromatherapy), and myrrh (highly valued in ancient times).

To make a very long story as short as possible, Jesus was probably born between 6 and 4 BC. The Gospels of Luke and Matthew are the most reliable sources of information, but they were not specific on dates.

“Friends call me Snow Miser, whatever I touch turns to snow in my clutch. I’m too much.” – Snow Miser

What does Santa use when he goes fishing? . . . His north pole!

What’s red and white and falls down the chimney? . . . Santa Klutz!

What I don’t like about office Christmas parties is looking for a new job the next day.

“Santa Claus Is Comin’ To Town” would be a very scary song to somebody who didn’t know who Santa Claus was.

What do you call a cat on the beach at Christmastime? . . . Sandy claws!

This holiday season, in lieu of gifts, I’ve decided to give everyone my opinion.

A letter to north pole comes back stamped, “Dream on, kid!” #things youdontwanttohear

Why do reindeer scratch themselves? . . . Because they’re the only ones who know where they itch!

Alabama was the first state to recognize Christmas as an official holiday, in 1836.

What do you call a polar bear wearing ear muffs? . . . Anything you want. He can’t hear you!

“Now you go home and write “I am very sorry for what I did to Frosty” a hundred zillion times. And then maybe – just maybe, mind you – you’ll find something in your stocking tomorrow morning.” – Santa

What do you call a bunch of grandmasters of chess bragging about their games in a hotel lobby? . . . Chess nuts boasting in an open foyer!

What do reindeer have that no other animals on earth have? . . . Baby reindeer.

“The best way to spread Christmas Cheer, is singing loud for all to hear.” – Buddy the Elf #moviequotes

The last gift Santa gives everyone is skepticism.

What kind of pine has the sharpest needles? . . . A porcupine. I bet if people worked instead of waited outside before Black Friday, they could probably afford to pay for gifts at full price.

If Santa Claus and Mrs. Claus had a child, what would he be called? . . . A subordinate Claus

The characters Bert and Ernie on Sesame Street were named after Bert the cop and Ernie the taxi driver in Frank Capra’s “Its A Wonderful Life.” #orwerethey

Christmas’ date of December 25 was made official by Pope Julius I, in the 4th century AD, because this coincided with the pagan rituals of Winter Solstice.

What did Jack Frost say to Frosty the Snowman? . . . Have an ice day!

“You can’t fool me! There ain’t no Sanity Claus!” – Fiorello

If athletes get athletes foot, what do astronauts get? . . . Missle toe!

I thought by the time I was a successful 50-year old adult I’d be tired of putting people’s yard reindeer in sex positions. I was wrong.

The movie Elf is the funniest movie about a kidnapped baby I have ever seen.

If Santa rode a motorcycle, what kind would it be? . . . A Holly Davidson!

“I will honor Christmas in my heart and try to keep it all the year.”

Christmas has been cancelled! Santa died laughing when I told him you’d been good this year!

What did Santa shout to his toys on Christmas Eve? . . . Okay everyone, sack time!

“Look, Charlie, let’s face it. We all know that Christmas is a big commercial racket. It’s run by a big Eastern syndicate, you know.” – Lucy Van Pelt

If cellphones had been more common/convenient in 1989, Clark Griswold wouldn’t have had to spend all day stuck in his attic.

Santa Claus has the right idea – visit people once a year.

What did one angel say to the other angel? . . . Halo there!

I try to be unusually kind and compassionate to those around me during the Holidays, because I never know who will end up being my Secret Santa.

“If we don’t fail sometimes, our successes don’t mean anything. You must be strong.” – Sister Mary Benedi

What do elves put on their candy canes? . . . Their tongues!

A lady lost her handbag in the bustle of Christmas shopping. It was found by an honest little boy and returned to her. Looking in her purse, she commented, “Hmmm…. That’s funny. When I lost my bag there was a $20 bill in it. Now there are twenty $1 bills.” The boy quickly replied, “That’s right, lady. The last time I found a lady’s purse, she didn’t have any change for a reward.”

“‘Twas a long time ago, longer now than it seems in a place perhaps you’ve seen in your dreams. For the story you’re about to be told began with the holiday worlds of auld. Now you’ve probably wondered where holidays come from. If you haven’t I’d say it’s time you begun.” – Santa

“Yeah. Thanks for telling us. I was expecting a check. Instead I got enrolled in a jelly club. 17 years with the company. I’ve gotten a Christmas bonus every year but this one. You don’t want to give bonuses, fine. But when people count on them as their salary, well what you did just plain…” – Clark Griswold #moviequotes

“Seeing is believing, but sometimes the most real things in the world are the things we can’t see.” – The Conductor #moviequotes

“First we’ll make snow angels for two hours, then we’ll go ice skating, then we’ll eat a whole roll of Tollhouse Cookie-dough as fast as we can, and then we’ll snuggle.” — Buddy the Elf

“Rats. Nobody sent me a Christmas card today. I almost wish there weren’t a holiday season. I know nobody likes me. Why do we have to have a holiday season to emphasize it?” – Charlie Brown

What to get “him” for Christmas… Buy him a cordless drill. It does not matter if he already has one. I have a friend who owns 17 and he has yet to complain. As a man, you can never have too many cordless drills.
No one knows why.

Just before Christmas, an honest politician, a generous lawyer and Santa Claus were riding in the elevator of a very posh hotel. Just before the doors opened they all noticed a $20 bill lying on the floor. Which one picked it up?
Santa of course, because the other two don’t exist!

There were two (pc joke victims) who went deep into the frozen woods searching for a Christmas tree… After hours of subzero temperatures and a few close calls with hungry wolves, one (pc joke victim) turned to the other and said, “I’m chopping down the next tree I see. I don’t care whether it’s decorated or not!”

Did you know that according to the song, “Rudolph the Red-Nosed Reindeer”, Santa has twelve reindeer? Sure, in the introduction it goes “There’s Dasher and Dancer and Prancer and Vixen, Comet and Cupid and Donner and Blitzen…” That makes eight reindeer. Then there’s Rudolph, of course, so that makes nine. Then there’s Olive. You know, “Olive the other reindeer used to laugh…” That makes ten. The eleventh is Howe. You know, “Then Howe the reindeer loved him…” Eleven reindeer. Oh, and number 12? That’s Andy! “Andy shouted out with glee.”
The proof is in the song!

What did Adam say on the day before Christmas? . . . It’s Christmas, Eve!

This entry was posted in December, Trivia