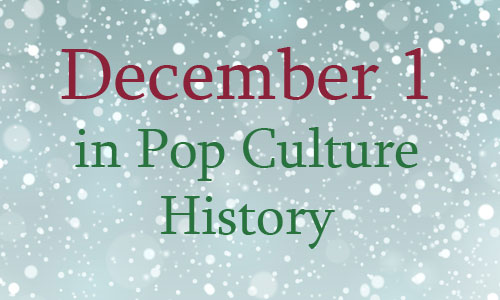 December 1 in Pop Culture History
800 – Charlemagne judged the accusations against Pope Leo III in the Vatican, and decided in the Pope’s favor.

1783 – The first manned voyage of a lighter-than-air hydrogen balloon left Paris carrying Professor Jacques Alexander Cesar Charles and Marie-Noel Robert to almost 500 feet and landed 28 miles away after about 2 hours in the air. 1841 – The first steamboat engine built in America for a screw-propelled vessel, designed by John Ericsson and built by Captain Sylvester Doolittle, installed on the ship Vandalia, was launched.

1955 – Rosa Parks refused to move to the back of a public bus in Montgomery, Alabama.

1958 – A fire at Our Lady of Angels School elementary school in Chicago killed 90 children.

1989 – Christmas Vacation was released in theaters.

1990 – The Chunnel between England and France was connected and celebrated when and Englishman and Frenchmen broke their their respective sides. It was officially opened by Queen Elizabeth II and the French president, François Mitterrand, in a ceremony held in Calais on May 6, 1994.

1992- The Young and The Restless aired the 5,000th episode. In honor of the event, The Price Is Right (also CBS) even featured Y&R themed showcases.

1994 – The Game Show Network, the 24-hour channel dedicated to game shows, made its debut

1997 – 8 planets in our Solar System lined up from West to East beginning with Pluto, followed by Mercury, Mars, Venus, Neptune, Uranus, Jupiter, and Saturn, along with a crescent moon, in a rare alignment visible from Earth that lasted until December 8.