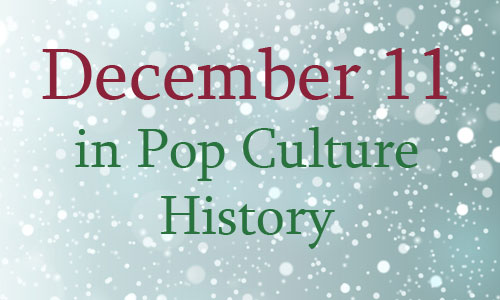 1769 – Venetian Blinds were patented in London by Edward Bevan in England.

1844 – Dr. Horace Wells became the first person to have a tooth extracted after receiving an anesthetic (Nitrous Oxide) for the dental procedure, by Dr. John M. Riggs.

1911 – In Stockholm, Sweden, Marie Curie became the first person to be awarded a second Nobel prize.

1941 – Germany and Italy declared war on the United States.

1947 – The United Mine Workers union withdrew from the American Federation of Labor.

1964 – Singer Sam Cooke was shot and killed by the motel manager of the Hacienda Motel, where he was staying.

1967 – The Concorde, a British/French venture; the world’s first supersonic airliner, was unveiled in Toulouse, France.

1985 – The Unabomber killed his first victim, Hugh Scrutton who was killed in his computer store when a mailed package exploded, in Sacramento, California.

1987 – Throw Momma From the Train, Empire of the Sun and Wall Street debuted in theaters.

1992 – The Muppet Christmas Carol and A Few Good Men were released in theaters.

1997 – More than 150 countries agreed at a global warming conference in Kyoto, Japan, to control the Earth’s global-warming “greenhouse gases.”

2008 – Bernie Madoff was arrested for bilking clients for hundreds of millions of dollars.

2009 – The Lovely Bones was released in theaters.

2010 – The first customer delivery of a Nissan Leaf (an all-electric vehicle) was made at by a dealer at Petaluma, California.