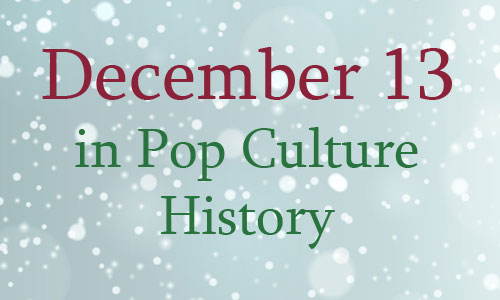 1545 – The Council of Trent began; it was the planning of responding to the Protestant Movement, by the Catholic Church.

1962 – Relay I, the first U.S. communications satellite was launched.

1968 – Science magazine published the essay ‘Tragedy of the Commons’, by Garrett Hardin.

1985 – The Jewel of the Nile, A Chorus Line and Clue debuted in theaters.

1996 – Jerry Maguire, Mars Attacks! and The Preacher’s Wife were released in theaters.

2000 – Al Gore conceded the presidential election to George W. Bush. A later investigation, counting the pivital Florida votes, indicated that Bush did win the election, by a few hundred votes.

2003 – Saddam Hussein was captured near his hometown of Tikrit, Iraq.

2013 – The Hobbit: The Desolation of Smaug, American Hustle, Tyler Perry’s A Madea Christmas and Saving Mr. Banks were released in theaters.