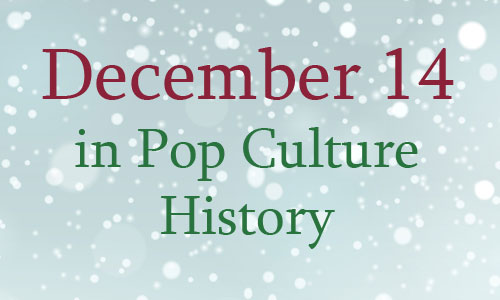 1656 – Imitation pearls were first manufactured by a Frenchman, named Jacquin.

1852 – Cullen Whipple, of Providence, R.I., patented (# 9477) his “Mechanism for Pointing and Threading Screw-Blanks in the Same Machine.” Prior to that screws were generally made with a flat tip. His machine made them pointy.

1900 – Max Planck demonstrated that energy can exhibit characteristics of physical matter, in certain situations, introducing quantumn mechanics. Previously, energy was considered a form only in wavelengths.

1986 – Voyager, the experimental aircraft piloted by Dick Rutan and Jeana Yeager, took off from Edwards Air Force Base in California on the first non-stop, non-refueled flight around the world, in nine days.

1990 – Mermaids was released in theaters.

2007 – I Am Legend & Alvin and the Chipmunks debuted in theaters.

2012 – Adam Lanza entered the Sandy Hook Elementary School in Newton, Connecticut, and shot 26 people, and then himself. 20 children were killed in the attack.

2012 – The Hobbit: An Unexpected Journey was released in theaters.