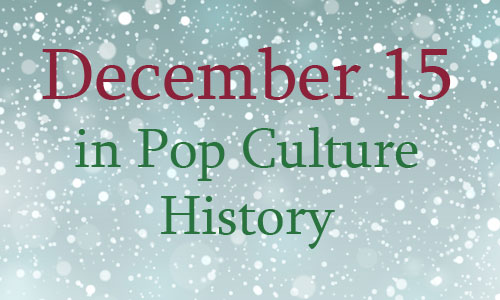 December 15 in Pop Culture History
1827 – The city of Boston, Massachusetts, the School Committee voted to require, effective March 1 1828, that public school students show that they had been vaccinated against smallpox prior to school entrance. Certificates to the board of health were to be issued where necessary for free vaccination. This initiative came just three decades after Edward Jenner’s discovery of a method to immunize against smallpox. The state of Massachusetts passed the first school vaccination law in 1855, followed by New York (1862) and Connecticut (1872).
– Today in Science

1836 – A fire destroyed the US Patent Office, erasing the records of most of the first 9,957 US patents’ records.

1933 – The Twenty-first Amendment to the United States Constitution repealed the Eighteenth Amendment, which prohibited the sale, manufacture, and transportation of alcohol.

1939 – Gone with the Wind premiered at Loew’s Grand Theatre in Atlanta, Georgia, United States. The release was so big that the mayor of Atlanta declared a 3-day festival that concluded with a state holiday on December 13th.

1944 – Bandleader Glenn Miller’s plane disappeared over the English Channel. One of the largest music stars of his day, he was the first of many who died in an airplane mishap.

1968 – Philadelphia Eagles fans pelted Santa Claus with snowballs. The “real” Santa Claus who was supposed to appear was stuck in a snowstorm in nearby New Jersey. Frankie Olivo was a fan who dresses as Santa for the game, and was asked to play the role of Santa on the field.  The skinny 19-year old, in his home-made costume, was not well received by the 54,000 Eagles fans at Franklin Field.

1973 – The American Psychiatric Association voted 13-0 to remove homosexuality from its official list of psychiatric disorders.

1995 – Sense and Sensibility, Heat and Jumanji was released in theaters.
1999 – Vargas Tragedy, Venezuela

2000 – The Emperor’s New Groove, What Women Want, Dude Where’s My Car and Chocolat debuted in theaters.

2000 – Chernobyl nuclear plant was officially, permanently shut down in Ukraine, after the April 26, 1986 disaster.

2006 – The Pursuit of Happyness, Dreamgirls, Eragon and Charlotte’s Web debuted in theaters.

2007 – The Weather Channel released a compilation of the music used during their Local on the 8s segment. It peaked #1 on the Billboard Top 100 chart for Contemporary Jazz.