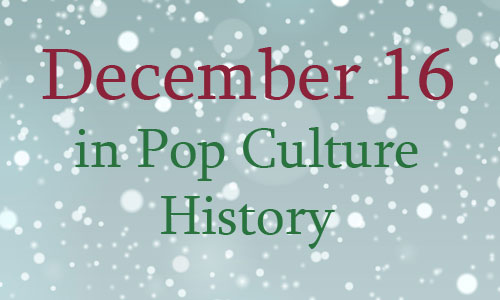 1707 (Eruption) The last recorded eruption of Mount Fuji in Japan.

1811 (Earthquake) An 8.6 magnitude earthquake hit the United States, the largest in our history. The area affected included: Missouri, Arkansas, Missouri, Illinois, Kentucky, Tennessee, and Arkansas. Amazingly, no people were killed.

1884 – The first US patent (#309,219) was issued for an automatic liquid vending machine to William H. Fruen of Minneapolis, MN. People could get a measured amount of a liquid for coin payment.

1893 – Czech composer Antonin Dvorak’s Symphony No. 9 in E Minor From the New World was performed at Carnegie Hall. The music had African roots, and the piece greatly influenced the American musical landscape for the next century.

1912 -The world’s first stamp to depict an airplane was issued in the US, available at Post Offices on January 1, 1912.

1944 – Attacking the Allies in northern France through northwestern Belgium, Hitler’s army started the Operation Mist (aka Ardennes Offensive or the Battle of the Bulge).

1965 – Astronauts Wally Schirra and Thomas Stafford made Jingle Bells the first song performed in space. They played it on a harmonica with bells (and implied spotting Santa) while orbiting Earth on Gemini 6 on On Dec. 16, 1965.

1994 – Dumb and Dumber was released in theaters.

2011 – Sherlock Holmes: A Game of Shadows, Alvin and the Chipmunks: Chipwrecked and Mission Impossible: Ghost Protocol were released in theaters.