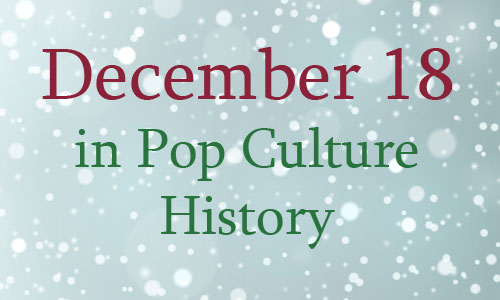 1839 – John William Draper took a daguerreotype of the moon, the first celestial photograph made in the US.

1865 – The 13th Amendment went into effect, abolishing slavery in the US.

1892 – The premiere performance of The Nutcracker by Pyotr Ilyich Tchaikovsky in Saint Petersburg, Russia.

1912 – Piltdown Man’s skull was found in a gravel pit in Sussex, England. At first, it was believed to be the ‘missing link’ between man and early primates, but was later discovered to be a hoax.

1932 – The Chicago Bears defeated the Portsmouth Spartans (9-0) in the first NFL Championship Game.

1936 – The first giant panda in the US, Su-Lin, arrived in San Francisco from China.

1968 – Chitty Chitty Bang Bang was released. It was based on Ian Fleming’s book of the same name.

1977 – George and Kathleen Lutz purchased their new home at their home at 112 Ocean Avenue in Amityville New York. Their 28 day adventure in the home was dramatically portrayed in the 1977 book and 1979 film, The Amityville Horror.

1996 – The Oakland, California school board unanimously passed a resolution for the incorporating of Ebonics in the classroom.

1998 – The Prince of Egypt and You’ve Got Mail were released in theaters.

2002 – The Lord of the Rings: The Two Towers debuted in theaters.

2009 – Avatar and Nine were released in theaters.

2013 – A&E suspended Duck Dynasty star Phil Robertson for comments he made regarding homosexuality and the civil rights era in an interview with GQ magazine. He was reinstated on December 27.

2013 – Her and Anchorman 2: The Legend Continues were released in theaters.
Save