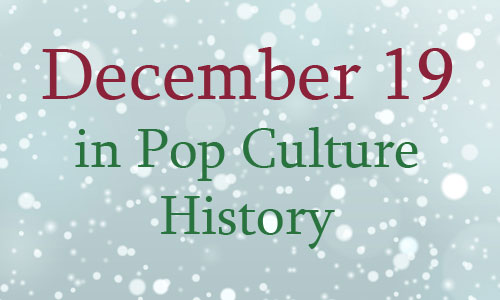 1871 – Samuel Clemens received a patent (# 121,992) for “An Improvement in Adjustable and Detachable Garment Straps”, a type of cumberbun/belt.

1903 – The Williamsburg Bridge, was opened in New York City.

1907 – A coal mine explosion in Jacobs Creek, Pennsylvania, killed 239 workers; there was one survivor, Joseph Mapleton, in the Darr Mine Disaster.

1924 – The last Rolls-Royce Silver Ghost. the first ‘Best Car in the World’, was sold in London, England.

1950 – Rose Marie Reid of Los Angeles, California, received a patent (#2,535,018) for a one-piece bathing suit “embodying a novel construction for causing it to snugly fit the body of a wearer in a flattering manner,” using elastic fabric.

1986 – Platoon and Little Shop of Horrors debuted in theaters.

1998 – President Bill Clinton was charged with lying under oath to a federal grand jury and obstructing justice. Clinton, the second president in American history to be impeached, vowed to finish his term. His lie was about an affair with 21 year-old intern, Monica Lewinsky.

2001 – The Lord of the Rings: The Fellowship of the Ring debuted in theaters.

2014 – Night at the Museum: Secret of the Tomb and Annie were released in theaters.