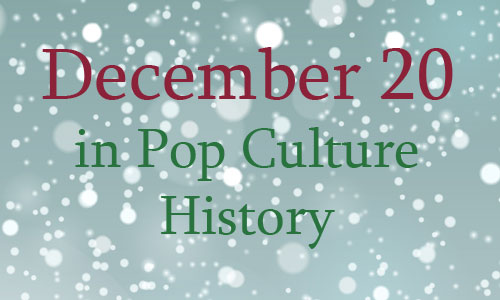 December 20 in Pop Culture History
1803 – Although officially signed in April 1803, the French flag came down and the United States’ flag rose in New Orleans, completing the Louisiana Purchase.

1955 – Cardiff was declared the capital city of Wales, United Kingdom. It is also the city where much of the action in the modern Doctor Who television show takes place.

1980 – The Announcerless NFL Game – NBC televised a game between the New York Jets and the Miami Dolphins without any announcers, relying on increased use of graphics (this was pre-CGI) and more detailed calls by the Orange Bowl’s Public Announcements. The Jets won, 24-17, but NBC never tried it again.

1985 – The Color Purple, Out of Africa and Enemy Mine were released in theaters.

1987- The Doña Paz collision, the worst peacetime maritime disaster in history. The ship collided with an oil tanker and caught fire, with 4,386 fatalities. It was said that crew made no attempt to organize the passengers, and that the life jacket lockers had been locked.

1991 – Father of the Bride was released in theaters.