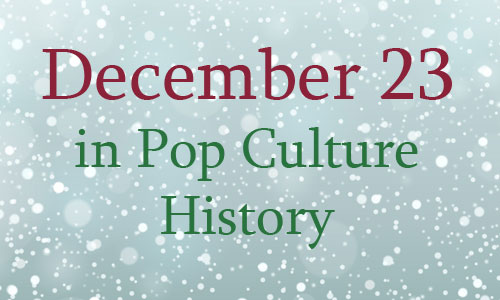 December 23 in Pop Culture History
1823 – A Visit From St. Nicholas, also known as The Night Before Christmas, was published. Clement Clarke Moore acknowledged authorship in 1837.

1888 – Suffering from severe depression, Vincent Van Gogh cut off the lower part of his left ear with a razor in Arles, France.

1947 – The transistor was first demonstrated by Walter H. Brattain and John Bardeen at Bell Laboratories.

1954 – Led by Dr. John P. Merrill, the first successful kidney transplant was carried out between identical twins at Peter Bent Hospital, Boston, Mass. The kidney was donated to Richard Herrick, 23, by his identical twin, Ronald.

1959 – Early rocker Chuck Berry was arrested for bringing a 14 year old girl from Mexico to Missouri.

1970 – The North Tower of the World Trade Center in Manhattan, New York, New York reached 1,368 feet, making it the tallest building in the world at that time.

1972 – NFL’s “Immaculate Reception” – Franco Harris of the Pittsburgh Steelers grabbed a deflected pass from quarterback Terry Bradshaw to score a touchdown, winning the game for the Steelers 13-7 over the Oakland Raiders.

1986 – Experimental aircraft Voyager landed at Edwards Air Force Base in California, completing the first nonstop flight, just over nine hours, around the globe on a single load of fuel.

1989 – To celebrate the fall of the Berlin Wall, Leonard Bernstein and an international orchestra & chorus performed in Berlin a version of Beethoven’s 9th Symphony, in which Freude (Joy) was changed to Freiheit (Freedom).

1994 – Legends of the Fall and Nobody’s Fool were released in theaters.

2009 – Alvin and the Chipmunks: The Squeakquel was released in theaters.