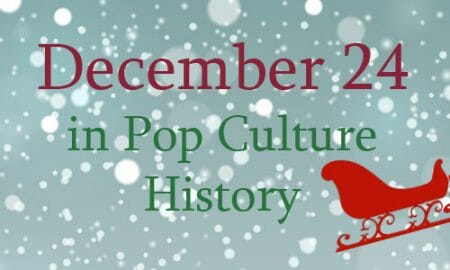 December 24 in Pop Culture History
1801 – Richard Trevithick publicly displayed his “Puffing Devil,” or “Puffer,” the first steam-powered passenger vehicle. The steam engine was a prototype of steam powered trains.
1814 – The War of 1812 ended between the British Empire and the United States.
1818 – Silent Night (music: Franz Xaver Gruber, lyrics: Joseph Mohr) premiered in the church of St. Nikolaus in Oberndorf, Austria.
1851 – A fire erupted at the Library of Congress in Washington, D.C., destroying about 35,000 books, including much of Thomas Jefferson’s collection.
1865 – In Pulaski, Tennessee, a group of Confederate veterans formed the “Ku Klux Klan.”
1889 – A bicycle with a back-pedal brake was patented (# 418,142) by Daniel Stover and William Hance of Freeport, Ill.
1914 – An unofficial ‘cease fire’ on the Western Front, the “Christmas truce” began. Both sides stopped fighting, shared gifts, and celebrated Christmas together. An estimated 100,000 British and German troops were involved.
1955 – The Lennon Sisters debuted on the Lawrence Welk Show (ABC)
1955 – NORAD Tracks Santa for the first time in what will become an annual Christmas Eve tradition, thanks to a misprinted phone number in a Sear’s retail catalogue. For the first several years, it was run by the Continental Air Defense Command (CONAD) Center.
1968 – Apollo 8 broadcast to the Earth, and reported that there is a Santa Claus.
1972 – Entertainment Bob Hope gave his ninth (and final) Christmas show in Vietnam.
1973 – District of Columbia Home Rule Act was passed, giving residents of Washington DC the power to elect their own local government.
1988 – #1 Hit December 24, 1988 – January 13, 1989: Poison – Every Rose Has Its Thorn
1993 – Tombstone and Philadelphia were released in theaters.
1997- Woody Allen married Soon-Yi Previn, the adopted daughter of his former girlfriend Mia Farrow.
Save