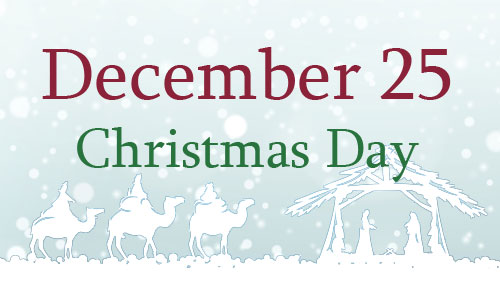 350 – Pope Julius I, bishop of Rome, proclaimed December 25 the official celebration date for the birthday of Christ.

800 – Charlemagne was coronated as Holy Roman Emperor, in Rome.

1066 – William the Conqueror, the Duke of Normandy, was crowned king of England, at Westminster Abbey, London.

1643 – Christmas Island, in the Indian Ocean, was found and named by English Captain William Mynors.

1776 – George Washington led a successful raid on the Hessian/British troops in Trenton, NJ. There are reports that the usually stoic future president made a request of the big-boned General Harry Knox: “shift that fat ass Harry, but slowly, or you’ll swamp the damned boat.”

1809 – The first US ovariotomy (the surgical removal of an ovarian tumor) was performed by Dr. Ephraim McDowell, in Danville, KY.

1815 – The Handel and Haydn Society gave its first performance in Boston, MA.

1868 – US President Andrew Johnson granted an unconditional pardon to all Civil War Confederate soldiers and officers.

1914 – German and British soldiers stopped firing late Christmas Eve, and started singing Christmas Carols. In the morning, they exited their trenches and walked towards the side of thier enemies shouting ‘Merry Christmas.’ Both sides stopped fighting, played football (soccer) and even exchanged token gifts.

1971 – Longest Game in NFL History- The  Miami Dolphins vs. Kansas City Chiefs in a AFC Divisional Playoff Game.
In the longest NFL game played to date at 82 minutes, 40 seconds. Garo Yepremian kicked the winning 37-yard field goal after 7:40 of the second overtime period, giving the Dolphins a 27-24 win.

1989 – Nicolae Ceaucescu, the last dictator of Romania, together with his wife, was executed by firing squad after a two-hour trial.

1990 – The Godfather Part III was released in theaters.

1992 – Chaplin and Hoffa were released in theaters.

1993 – Batman: Mask of the Phantasm and Grumpy Old Men were released in theaters.

1996 – JonBenet Ramsey was murdered in her home.

1999 – Galaxy Quest and The Talented Mr. Ripley were released in theaters.

2001 – Kate and Leopold and Ali debuted in theaters.

2003 – Cheaper by the Dozen debuted in theaters.

2006 – (fictional) The Guinevere One probe was due to land on Mars, but went missing as the alien Sycorax invade Earth on TV’s Doctor Who episode ‘The Christmas Invasion’.

2007 – Aliens Vs. Predator – Requiem and The Bucket List debuted in theaters.

2008 – The Curious Case of Benjamin Button, Marley & Me, Valkyrie and Bedtime Stories debuted in theaters.

2009 – Sherlock Holmes and It’s Complicated were released in theaters.

2013 – Lone Survivor, The Wolf of Wall Street, The Secret Life of Walter Mitty Grudge Match and 47 Ronin were released in theaters.

2014 – The Interview, Selma, Unbroken, Into the Woods and American Sniper were released in theaters.