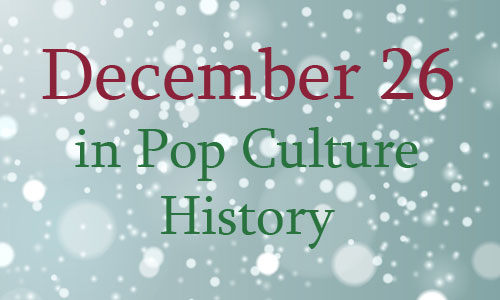 December 26 in Pop Culture History
1610 – Countess Elizabeth Bathory had tortured and killed possibly hundreds young girls for over a dozen years. She believed eating flash and bathing in their blood would keep her youthful.

1906 – The world’s first full-length feature film, Story of the Kelly Gang (about 70 minutes) was presented in the Town Hall at Melbourne, Australia.

1919 – Babe Ruth, of the Boston Red Sox, was sold to the New York Yankees by owner Harry Frazee, beginning the ‘Curse of the Bambino’, which lasted until 2004.

1940 – The Philadelphia Story, directed by George Cukor, based on the Broadway play of the same name and starring Cary Grant and Katharine Hepburn, was released.

1963 – The Beatles’ I Want to Hold Your Hand and I Saw Her Standing There were released as singles in the US.

1973 – Based on William Peter Blatty’s 1971 novel, The Exorcist, starring Linda Blair, was released in theaters.

1982 – The Man of the Year in Time magazine was the personal computer.

2004 (Earthquake & Tsunami) Northern Sumatra, Indonesia. A series of tsunamis killed more than 225,000 people in eleven countries with waves up to 100 feet high. It was the deadliest natural disaster in modern history.
Tilly Smith, 10 year old British schoolgirl, saved her family and 100 other tourists from the 2004 Asian tsunami, by recognizing signs of tsunamis she had learned in a geography lesson two weeks before.