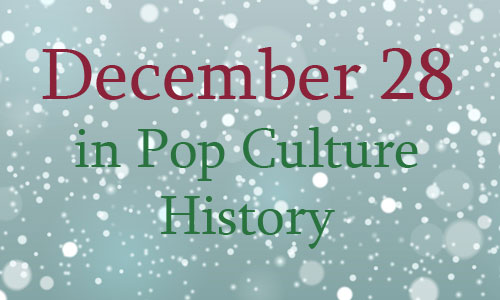 1869 – The Knights of Labor, a labor union of tailors in Philadelphia, PA, held the first Labor Day.

1895 – Louis and Auguste Lumiere screened a series of short scenes from everyday French life (and charged admission for the viewing) at the Grand Cafe in Paris.

1958 – “The Greatest Game Ever Played” – The 1958 NFL Championship game featured the first-ever sudden death overtime in NFL history, fullback Alan Ameche’s 1-yard touchdown run gave the Colts a 23–17 win over the Giants. 17 future members of the Pro Football Hall of Fame were involved in the game.

1973 – The Endangered Species Act was passed in the United States.

1974 – Tom Baker made his first full appearance as the Fourth Doctor on Doctor Who.

1991 – Nine people were killed in a mini-riot at a hip-hop event promoted by Dwight “Heavy D” Myers and Sean “P Diddy” Combs. Over 3000 tickets were sold for the event, which had space for less than 2800 people.

2000 – Founded in 1872, retailer Montgomery Ward announced it was going out of business.