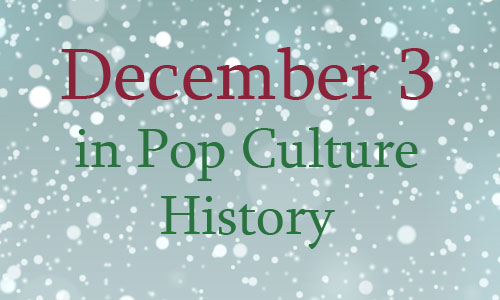 1910 – The neon light was displayed for the first time at the Paris Motor Show at the Grand Palace. The lamp was developed by French inventor Georges Claude. Advertising neon signs started showing up in 1913, notably at the Paris Opera House. The most famous neon sign is probably the Las Vegas sign.

1919 – The Quebec Bridge over the Saint Lawrence River between Sainte-Foy (near Quebec City) and Lévis, Quebec opened.

1922 – The first public Technicolor motion picture film, The Toll of the Sea, was released at the Rialto Theatre, in New York City.

1927 – Putting Pants on Philip, the first Laurel and Hardy film, was released.

1960 – The musical Camelot debuted at the Majestic Theatre on Broadway.

1976 – An assassination attempt was made on Bob Marley. Shot twice, he quickly recovered.

1979 – Eleven people were killed in a stampede at Cincinnati’s Riverfront Coliseum prior to an appearance by The Who. “Festival Seating’ was pretty much to blame – thousands of people has ‘first come, first seated’ tickets, and a sound check made many think the concert had already begun.

1984 – The Bhopal-Union Carbide disaster in India killed over 8,000 people, and injured hundreds of thousands.

1992 – The Greek oil tanker Aegean Sea, carrying 80,000 tons of crude oil, ran aground in a storm while approaching A Coruna, Spain, spilling most of the oil.

1994 – The Sony PlayStation was released in Japan.

1997 – 121 countries signed the treaty prohibiting manufacture and deployment of anti-personnel land mines in Ottawa, Canada. Notable exceptions were: The United States, People’s Republic of China, and Russia.1999 – The Mars Polar Lander crashed into the Martian surface.

2010 – The Black Swan was released in theaters.

2012 (Typhoon) At least 475 people were killed after Typhoon Bopha made landfall in the Philippines.