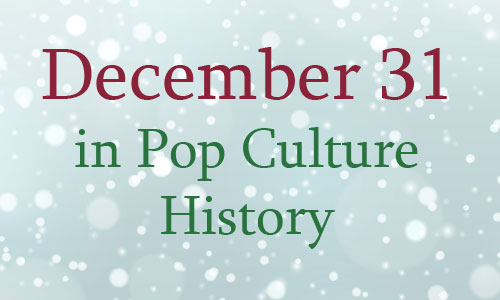 December 31 in Pop Culture History
1600 – The British East India Company was chartered. It was the first global mega-corporation.

1805 – The ‘Calendar of Reason’ had been introduced in France on November 24, 1793. It was abandoned, and the Gregorian calendar, which we still use today, replaced it.

1865 – “Neither slavery nor involuntary servitude… shall exist within the United States, or any place subject to their jurisdiction” was some of the phrasing in the 13th Amendment, eliminating Slavery in the US.

1879 – Thomas Edison demonstrated the incandescent light to the public for the first time, in Menlo Park, New Jersey.

1923 – The chimes of Big Ben were broadcast on radio for the first time by the BBC.

1938 – The ‘drunkometer’ – the first breath test for car drivers, was invented by Dr Rolla N. Harger of Indiana University School of Medicine.

1955 – General Motors became the first US corporation to make over $1 billion in a single year.

1956 – Bob Barker made his national debut on Truth or Consequences.

1972 – Roberto Clemente was killed, along with four others when the cargo plane in which he is traveling crashes off the coast of Puerto Rico.

1985 – Singer Rick Nelson was killed in a plane crash in De Kalb, Texas.

1999 – The United States, in accordance with the Torrijos-Carter Treaties, officially handed over control of the Panama Canal to Panama.

1999 – (fictional) The Earth is nearly pulled inside out when the renegade Time Lord ‘The Master’ opened the Eye of Harmony in the newly regenerated Doctor’s TARDIS (Doctor Who television movie).