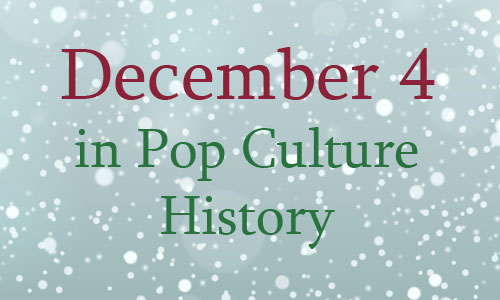 December 4 in Pop Culture History
1674 – In what is now Chicago, Father Jacques Marquette founded a mission on the shores of Lake Michigan to minister to the Illiniwek Indians.

1791 – The first edition of The Observer, the world’s first Sunday newspaper, was published in London.

1872 – The US ship Mary Celeste was found, in good condition, but with noone aboard, in the Atlantic Ocean.

1917 – “Shell Shock” was introduced as psychological trauma for war veterans.

1921 – The first Virginia Rappe manslaughter trial against Roscoe “Fatty” Arbuckle ended in a hung jury. (It was a horrible accident)

1945 – The Senate approved the participation of the United States in the UN. The United Nations began several weeks earlier, on October 24, 1945.

1952 – Starting today, and over the course of the next several days, Smog (severe air pollution) killed over 4,000 people in London.

1956 – The Million Dollar Quartet (Elvis Presley, Jerry Lee Lewis, Carl Perkins, and Johnny Cash) got together at Sun Studio. The recordings were released in 1981 and 1990.

1971 – A fire broke out at the Montreux Casino during a Frank Zappa concert, this event was the inspiration for Deep Purple’s iconic rock anthem Smoke on the Water

1981 – You Can’t Do That on Television premiered on Nickelodeon.
1981 – Reds premiered in theaters. Warren Beatty wrote, directed and starred in the film.

2009 – American Amanda Knox was convicted of murdering her British roommate, Meredith Kercher, in Italy. (it was later overturned)