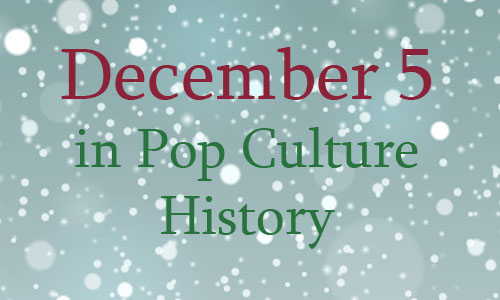 1854 – Aaron H. Allen of Boston, received U.S. patent# 12,017 for a folding chair as an “Improvement in Self-Adjusting Opera-Seat” for theatres or other public buildings. You have probably sat on his invention, if you have gone to a movie theater.

1876 – A fire at the Brooklyn Theater killed 295 people and injured hundreds more.

1876 – The Stillson wrench was patented by Daniel Chapman Stillson. The device was the first practical pipe wrench, the design is still in use today. (Patent #184,993)

1933 – Prohibition ended, thanks to the 21st amendment Utah being the last state needed to ratify it. When the 21st Amendment was passed to end Prohibition, American journalist H. L. Mencken celebrated with a glass of water, calling it “my first in 13 years.”

1997 – Good Will Hunting was released in theaters.

2005 – In the UK, the Civil Partnership Act granted civil partnerships “which include same sex partnerships” in the United Kingdom with rights and responsibilities identical to civil marriage.

2008 – O.J. Simpson, who was acquitted for the well-known double murder in Los Angeles, was sentenced for up to thirty-three years in prison for robbing a pair of memorabilia dealers. He is eligible for parole in 2017.