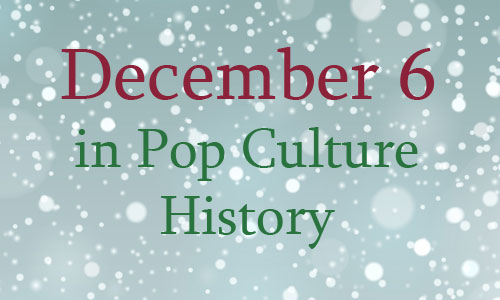 December 6 in Pop Culture History
1790 – The US Congress moved from New York to Philadelphia.

1830 – The U.S. Naval Observatory, one of the oldest scientific agencies in the US, was established as the ‘Depot of Charts and Instruments’ in Washington, D.C.

1850 – Hermann von Helmholtz (1821-94) announced the invention the ophthalmoscope, to the Berlin Physical Society. It enabled doctors to see directly into a patient’s eye.

1865 – The 13th Amendment to the US Constitution, officially ending the institution of slavery, was ratified.

1877 – Thomas Edison demonstrated the first sound recording, his reciting of ‘Mary had a Little Lamb’, at his Menlo Park, NJ Laboratory.

1884 – The Washington Monument was completed.

1906 – The first aerial photographs of Stonehenge were shown at the Society of Antiquaries. They were taken from a hydrogen balloon by 2nd Lieutenant Philip Sharpe of the Royal Engineers’ Balloon Section.

1907 – The Monongah Coal Mine Disaster killed 361 coal miners. It was the worst mining disaster in American history.

1933 – A federal judge ruled that James Joyce’s book, Ulysses, was not obscene

1947 – Everglades National Park in Florida was dedicated by President Harry S Truman. His “S” didn’t stand for a name.

1957 – Vanguard rocket carrying the first US satellite blew up on the launch pad at Cape Canaveral, Florida. It rose about four feet and collapsed.

1964 – Rudolph the Red-Nosed Reindeer debuted on NBC. The holiday tradition moved to CBS in 1972

1969 – Meredith Hunter was killed by ‘guards’ at the Altamont Music Festival.

1991 – Star Trek VI: The Undiscovered Country was released in theaters.

2002 – Winona Ryder was sentenced to 36 months of probation and 480 hours of community service after stealing more than $5,500 worth of merchandise from a Saks Fifth Avenue store in Beverly Hills, California. He also paid restitution and a fine.