(PCM) Blue Monday is the name given to what is supposed to be the most depressing day of the year. It typically falls on either the third or fourth Monday in the month of January.

We tend to lean more towards the fourth Monday in January and here’s why:

During the first week in January individuals are generally still wrapped up in all the holiday hoopla and are busy creating goals and resolutions for the new year. By the second and third week of January most people have already given up on or broken their resolutions and are beginning to feel down as the holiday season has ended.

By the fourth week of January the holiday credit card bills have rolled in and it is only natural with faced with impending debt and failed resolutions that the fourth Monday of January would become a very Blue Monday for a lot of folks. However, did you know that there may actually be a more scientific reason behind Blue Monday being the most depressing day of the year?

Several researchers and a holiday company called Sky Travel actually determined a calculation to determine Blue Monday using a mathematical equation. The first mention of Blue Monday was January 24, 2005 as part of a Sky Travel press release.  The date was devised to help Sky Travel analyze when people book holidays and holiday trends. According to Wikipedia, they used factors such as weather conditions, debt level (the difference between debt accumulated and our ability to pay), time since Christmas, time since failing our new year’s resolutions, low motivational levels and feeling of a need to take action.
One of the equations used looked something like this: 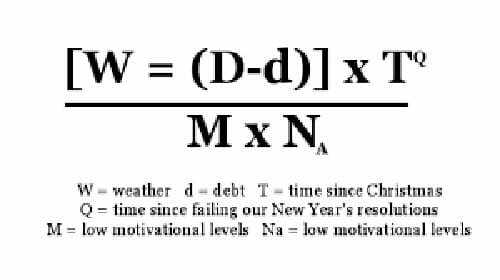 Dr Cliff Arnall, formerly of Cardiff University, is the man responsible for coming up with the equation for predicting the most depressing day of the year. He has also come up with another equation that predicts the happiest day of the year which generally falls sometime close to Midsummer in mid to late June.

Hopefully Blue Monday will not get you down too much! Try to spend the day with family and friends doing activities that can help take your mind off of life’s everyday burdens and realize tomorrow is another day.  Or you can just rock out with some New Order, below: