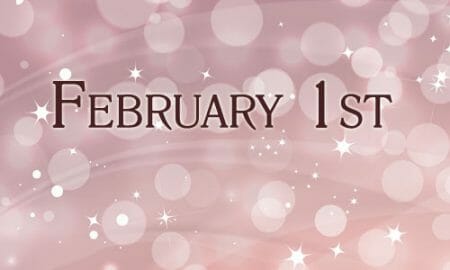 February 1st is Decorating With Candy Day.
It is also Robinson Crusoe Day.

1887 – The area known as Hollywood was founded.

1911 – Thomas Jennings was found guilty in Illinois with the first use of fingerprint evidence in the US.

1942 – Voice of America, the official external radio and television service of the US, begans broadcasting with programs aimed at areas controlled by the Axis powers (later at the communist block).

1953 – You Are There premiered on CBS radio.
When Northeast Airlines Flight 823 crashed on Rikers Island on February 1, 1957, prisoners were released from the prison building to help pull people from the wreckage. Some had their sentences commuted or reduced for acts of heroism during the incident.

1978 – Director Roman Polanski fled the United States to France after pleading guilty to charges of having sex with a 13-year-old girl.

1996 – The Communications Decency Act was passed by the US Congress.

2003 – Space Shuttle Columbia on mission STS-107 disintegrated during reentry into the Earth’s atmosphere, killing all seven astronauts aboard over Texas.

This entry was posted in February, History