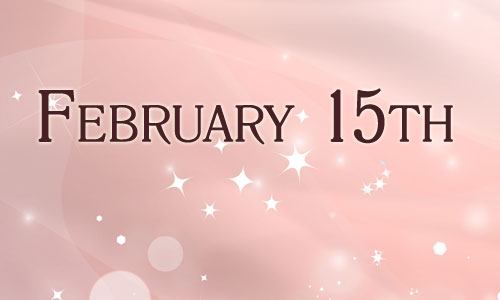 February 15 in Pop Culture History
1758 – Mustard was first advertised for sale in America, by Benjamin Jackson, in Philadelphia, PA.

1764 – The city of St. Louis was established in Spanish Louisiana (now in Missouri, USA).

1898 – An explosion sank the battleship USS Maine in Cuba’s Havana harbor, killing 260 of the fewer than 400 American crew members aboard, sparking the Spanish-American war.

1903 – The first Teddy Bear was introduced in Brooklyn, NY.

1932 – George Burns and Gracie Allen debuted as regulars on The Guy Lombardo Show on CBS radio.

1946 – ENIAC, the first electronic general-purpose computer, was formally dedicated at the University of Pennsylvania in Philadelphia.

1961 – The whole 18-member U.S. figure skating team was killed in a plane crash in Berg-Kampenhout, Belgium. The team was on its way to the 1961 World Figure Skating Championships in Prague, Czechoslovakia.

1965 – The flag we know today, the red and white maple leaf was designed as the new flag of Canada. Prior to that, the official flag was Britain’s Union Jack.

1992 – Serial killer Jeffrey Dahmer was sentenced in Milwaukee to life in prison.

2013 – A meteor exploded in the sky over Russia’s Ural Mountains, near Chelyabinsk, shattering glass and setting off car alarms for miles. Also, asteroid DA14 came with 18,000 miles of Earth.