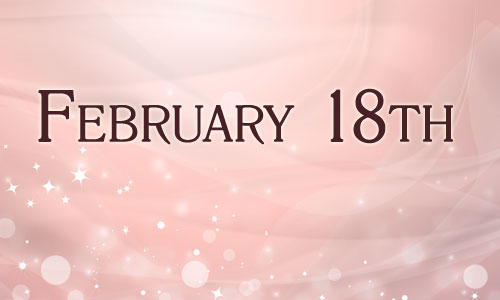 1856 – The “Know-Nothing Party,” convened in Philadelphia to nominate its first presidential candidate. The Know-Nothing movement began in the 1840s, when an increasing rate of immigration led to the formation of a number of groups to combat “foreign” influences in American society.

1885 – Mark Twain’s The Adventures of Huckleberry Finn was published for the first time.

1908 – The first US postage stamps in coils were available for the first time in vending machines.

1913 – Pedro Lascuráin becomes President of Mexico for 45 minutes, the shortest term to date of any person as president of any country.

1931 – A cow named Ollie was milked over St. Louis, MO. Her milk was cartoned and parachuted down.

1954 – The first Church of Scientology was established in Los Angeles.

1978 – The first Ironman Triathlon competition took place on the island of Oahu and is won by Gordon Haller.

2001 – Race car legend Ralph Dale Earnhardt was killed in a crash in the last lap of the Daytona 500 . Richard Petty won the race.