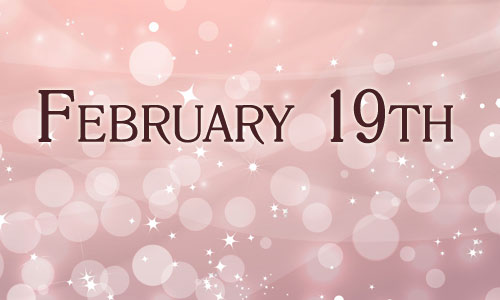 1848 – Donner Party Found. Of the 89 original members of the Donner Party, only 45 reached California. They had been trapped, with no provisions and little survival skills since late October of 1847, about 13 miles northwest of Lake Tahoe.

1864 – The Knights of Pythias was established in Washington, DC.

1884 – More than sixty tornadoes struck the Southern United States in one of the largest tornado outbreaks in U.S. history.

1881 – Kansas became the first state to prohibit all alcoholic beverages.

1942 – U.S. President Franklin D. Roosevelt signed Executive Order 9066, authorizing the removal of any or all people from military areas “as deemed necessary or desirable.” This was the basis for the Japanese Internment camps, which held over 100,000 Japanese and Japanese Americans until January 2, 1945. In 1988, President Ronald Reagan signed a bill to repay every surviving internee with a tax-free payment of $20,000 and an apology from the U.S. government.

1963 – The Feminine Mystique by Betty Friedan was published.

1982 – Rock legend Ozzy Osbourne was arrested for urinating on the Alamo.

1985 – Cherry Coke was introduced by Coca-Cola.

1987 – A controversial, anti-smoking public service announcement aired for the first time on television, featuring Yul Brynner shortly before he died of lung cancer.

1986 – The US Senate approved a treaty that outlawed genocide.

1994 – Martin Lawrence made a sexually explicit joke during his opening monologue during his appearance on Saturday Night Live. The joke was in reference to female genitalia and feminine hygiene. He ended up being banned from the NBC network for a year and from SNL for life. During re-broadcast of the episode the joke is replaced by a title card read off-screen and the joke nearly cost everyone at SNL their jobs.

2006 – The Rolling Stones performed in front of the largest open show for the public in Copacabana Beach in Brazil,1.3 Million people attended

2010 – Golfer Tiger Woods admitted to having several affairs, which were brought to light after an incident in Windermere, Florida, an Orlando suburb, around 2:30 a.m. on November 27, 2009. His car crashed, reportedly, but several eyewitness accounts said it looked like it was attacked by someone with a golf club. Ironically, his wife, Elin Nordegren, was reportedly informed about his infidelities shortly before the ‘crash.’