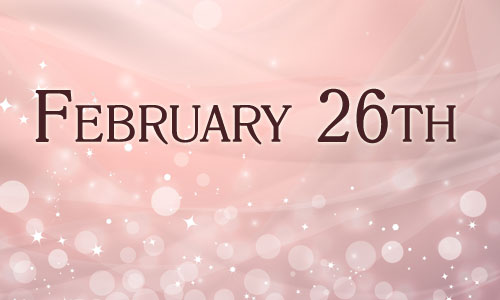 1616 – Galileo Galilei was formally banned by the Roman Catholic Church from teaching or defending the view that the earth orbits the sun.

1829 – Levi Strauss was born. He never married, so, ironically, he didn’t get to pass his genes on to the next generation.

1909 – Kinemacolor, the first successful color motion picture process, was first shown to the general public at the Palace Theatre in London with 21 short films.

1919 – 800,000 acres of the Grand Canyon, already a national monument, was designated a national park under President Woodrow Wilson

1946 – Finnish observers reported the first of thousands of sightings of ghost rockets.

1993 – The first of the World Trade Bombings occurred , the bomb went off in a parked truck under the North Tower. The bombing killed six and injured over a thousand people

1995 – Selena Quintanilla-Perez performed her last concert in Houston before being shot by her manager.

2012 – Trayvon Martin, an African-American teen walking home from a trip to a convenience store, was fatally shot in an altercation with George Zimmerman, a Hispanic neighborhood watch volunteer patrolling the townhouse community of the Retreat at Twin Lakes in Sanford, Florida.