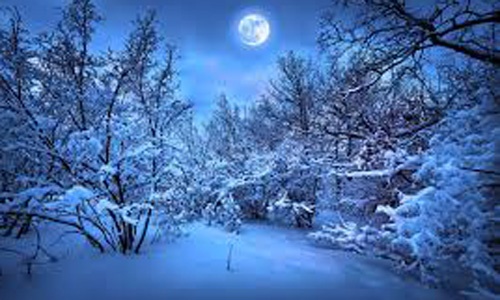 Winter means many things different people.  For some it is the best season of the year.  The thoughts of snow and cold, ice and winds bring smiles to many a face.  For others those same thoughts bring a feeling of melancholy.  The cold weather and the short days, as well as the snow and ice makes them shudder, as they contemplate shoveling the snow and salting the ice.  Modes of transportation beak down and there are the many accidents that happen during this time of year, as cars skid on black ice and public transportation is unable to run due to harsh weather conditions.

Still with all the trouble winter brings with it, it also brings much joy.  Children look for those first snowflakes to fall in the hopes of school cancelations.  They also have their sleds ready and have marked out the best places for getting a fast paced ride down a white slope.

Adults, as well, find joy in the winter weather.  There is the anticipation of skiing, for the winter sports enthusiasts.  Not to mention outside games of hockey or the joys of skating on a frozen pond.  Many romances have begun on skating dates, as well as proposals of marriage.

Food also seems to taste better in the cold weather.  Cooks take out their largest pots for soups and stews.  Warm apple pie, gooey chocolate chip cookies all take on a special appeal during the cold days.

Our homes become true places of refuge and joy as families gather around the fireplace and pop corn or roast chestnuts.  Romantic movies get pulled out of the cupboard as couples snuggle together under warm blankets.  Many a child has been conceived during the cold winter nights.

As the snow falls even the scientific mind knows and wonders at the fact that out of the millions of snowflakes that fall to the ground no two have ever been found that have the same shape.  Weathermen become popular as people eagerly wait for the daily reports so they may choose the right gear to take with them as they venture out.

Winter has its issues too.  For some people seasonal affective disorder becomes quite a problem as the days grow short people that are prone to depression have a harder time.  Older people tend to get sick more often and yes shoveling snow has taken out many a back.

All in all though, winter has a beauty all of its own as do all the season of the year.  White snow draping across evergreens is a beautiful picture to the mind.  The silence of the world after snow has fallen can give a sort of peace not found in any other time of year.  The evergreen itself is a source of hope for those who do not like winter as it is a promise of the spring to come.

As the song says “Silver white winters melt into spring” so does winter come to an end.  The snow may fall hard one day and over a week’s time the crocuses come out of the snow covered ground as the world slowly warms.  Winter doesn’t last forever.  Leaves begin to form on the trees and the white becomes a world of color as spring comes to the earth.