The painting shows a young boy and a female doll standing in front of a glass paneled door where many hands are pressed against the glass from the inside. When asked about the painting Stoneham says the boy is based on a photograph of himself at age five, the doorway is a representation of the dividing line between the waking world and the world of fantasy and impossibilities, while the doll is a guide that will escort the boy through it. The titular hands represent alternate lives or possibilities.

While the description from the artist seems fairly straightforward, the story of the painting takes a creepy turn when it became the source of a viral meme back in February of 2000. That was the year that the painting was put for sale in an eBay auction with a lengthy backstory claiming it was haunted.  According to Wikipedia, during a one man gallery showing by Stoneham back in the early 1970’s in Los Angeles, the painting was purchased by actor John Marley. After Marley’s death the painting ended up being discovered on the site of an old brewery by an elderly California couple, who are allegedly the ones who initially created the original eBay auction, claiming in the listing that the painting carried some sort of curse.

Evidence of the paintings curse was included in the auctions description and included details such as the claim that the characters in the painting moved at night and would at times exit the painting completely and enter the room in which the painting happened to be displayed. There was also a series of photographs that claim to show evidence of an incident in which the female doll character threatened the male character with a gun that she was holding, causing him to attempt to leave the painting. The sellers also included a disclaimer with the auction absolving themselves of all liability if the painting was purchased. 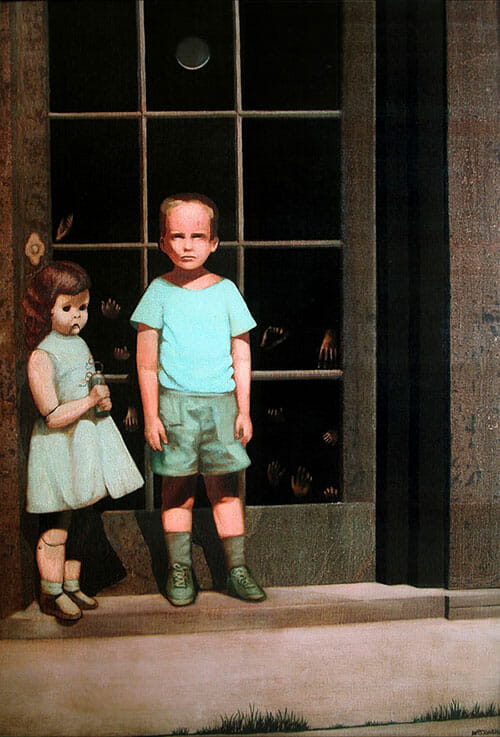 The eBay auction page was viewed over 30,000 times and word quickly spread around the internet causing the story of the painting to become a bit of a viral sensation. The initial asking price for the painting was $199 and it ended up selling to the Perception Gallery in Grand Rapids, Michigan for $1,025. Some people even claim that they felt ill or had unpleasant experiences after just viewing the painting. The gallery owners in Michigan contacted Stoneham about the painting and revealed to him the strange stories/occurrences listed in the eBay auction. Stoneham was quite surprised and even went on to tell the gallery owners that the item depicted in the painting that they claimed was a gun was nothing more than an old dry cell battery and a tangle of wires.

However, things take an even creepier turn when both the art gallery owner where the painting was first displayed and an art critic who reviewed it both died within one year of coming into contact with the painting. There is now a new painting the the series, which was commissioned by someone who was fascinated by the story. Stoneham called the new piece “Resistance at the Threshold’ and shows the same characters as the original painting 40 years older in the same style as the original. A second sequel, “Threshold of Revelation”, resolves mysteries of the boy’s life including that of the doll/girl (perhaps his real sister, discovered late in their lives), was completed in 2012 and can be seen on Stoneham’s website.

We can say that looking at the painting does make us feel quite uneasy, as it is almost as if the boy depicted in the painting is staring directly into your soul. Definitely wouldn’t want this one hanging around the office. Do you think the painting is actually haunted or is this just the making of yet another urban legend!