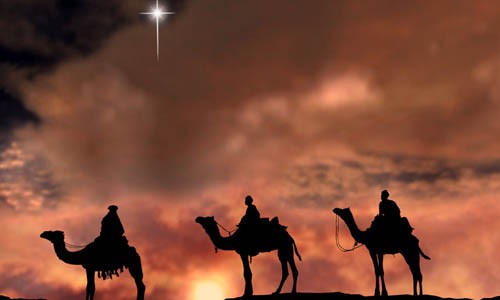 After Jesus was born in Bethlehem in Judea, during the time of King Herod, Magi[a] from the east came to Jerusalem 2 and asked, “Where is the one who has been born king of the Jews?  We saw his star when it rose and have come to worship him.”

3 When King Herod heard this he was disturbed, and all Jerusalem with him. 4 When he had called together all the people’s chief priests and teachers of the law, he asked them where the Messiah was to be born. 5 “In Bethlehem in Judea,” they replied, “for this is what the prophet has written:

6 “‘But you, Bethlehem, in the land of Judah,
are by no means least among the rulers of Judah;
for out of you will come a ruler
who will shepherd my people Israel.’[b]”

7 Then Herod called the Magi secretly and found out from them the exact time the star had appeared. 8 He sent them to Bethlehem and said, “Go and search carefully for the child. As soon as you find him, report to me, so that I too may go and worship him.”

9 After they had heard the king, they went on their way, and the star they had seen when it rose went ahead of them until it stopped over the place where the child was. 10 When they saw the star, they were overjoyed. 11 On coming to the house, they saw the child with his mother Mary, and they bowed down and worshiped him. Then they opened their treasures and presented him with gifts of gold, frankincense and myrrh. 12 And having been warned in a dream not to go back to Herod, they returned to their country by another route.  (Matthew Chapter two Verses 1 – 12.  The New International Version)

Having read the narrative above you may already be thinking, “Where does it say three?  After all, I have seen many manger scenes and they always show three magi.  And you would be right.  All the biblical narrative tells us is that Magi came from the east it does not at all mention how many there actually were.  Tradition has decided through the years that there were three based on the fact that they brought three gifts, gold, frankincense and myrrh.  Logic, it seems, dictates one gift per Magi.  It is also thought that each of these Magi were of the three races of human kind, African Caucasian and Asian.  The three are pictured in most Nativity as representing the three races.

The above biblical passage also only tells us that they were Magi.  However tradition has given them other titles as well, Kings and Wise men.  Wise men and Kings are self explanatory, but what are Magi?  Magi were “A very exclusive caste who led strict lives and kept the fires going at their places of worship in the mountains.  They also studied the stars of heaven and the dreams of men.  ( Maria Von Trapp, Let Me Tell You About My Savior)

The Bible also tells us that they came from the east.  This depends on where you actually live.  There are many countries to the east of the city of Jerusalem, where this story takes place, Russia China and India among them.  So these men had to come from one of these many countries.  The Catholic Bishop, Fulton Sheen, wrote in his Life Of Christ, That the Chinese had a prophesy of their own that said a savior would rise up out of the west.  Furthermore many believed that the western country where this would occur was, indeed, Israel.

What exactly was this star?  Some say a comet, and some say a conjunction of the planets in our solar system that aligned together in order to make them appear as one very bright star.  In the Old Testament God made the sun stand still for an entire day.  This was to help the Israelites to win a battle they were engaged in.  If God can make the sun stand still, he can also make a special star for the birth of his son and allow the three Magi to follow it.  The Magi almost confirm this when they said “We saw his star when it rose and have come to worship him.”  The Magi saw a single star and said that it rose on its own.  They saw something new in the sky.

The Magi, however, made one sad error in their calculations.  Some say the star disappeared and so they went to Jerusalem to ask for help.  The only thing the Bible tells us is that they came to Jerusalem.  It is possible that the star disappeared but it is also possible that Magi expected to find the one they called King of the Jews in the palace of King Herod.  They have assumed that a king would be born in a palace.

Herod, however, when he heard what the Magi were looking for, became angry and upset.  Herod was king, and Herod had put many to death that tried to take his kingdom from him.  He even killed his own sons. When Herod knew he was dying he actually had all the leading Jews in Jerusalem imprisoned, and gave the order to kill them on the day Herod himself died.  This was to insure that there would be weeping and mourning in  Jerusalem when he died even if it was not for him.

Herod at this time began to plot.  First he asked the Magi when the star had appeared, and then he gathered the Chief Priests and Teachers of the Law.  They knew that it was prophesized that the king or Savior or the messiah of the Jews would be born in Bethlehem a mere five miles from Jerusalem.  Herod imparted this information to the Magi, but he also asked that, when they found the child, they would come back and tell him, as he would also like to worship the child.  Herod’s actual motive was to kill the child in the easiest way possible.

It was then that the Magi left Jerusalem.  They saw the star and it led them to exactly the place where the child was.  The star ceased to move and hovered over the house.  Yes, it hovered over, not a stable where there would be a manger, but an actual house.

In the second chapter of the book of Luke we are told that Mary gave birth to a son and laid him in a manger as there was no room for them in the Inn.  So Jesus was born in a stable or possibly a cave there were many caves outside of Bethlehem that the Shepherds used as stables.  Bethlehem was where the sheep were raised for the sacrifices in the temple.  So Jesus, who would be called The Lamb of God would be born among other lambs.

The time table of the Magi arriving in Bethlehem is not certain.  If the star appeared well before Jesus was born, the Magi would have gotten to Bethlehem a little after the baby was born.  If, however the star appeared on the day the baby was born, the Magi would have first ascertained it’s meaning, then organized a well supplied caravan, and then start on their way.  The Magi had to be well supplied since no one knew where they were going or how long it would take.

It is most probable that the star appeared two years before the child was born.  This will be explained shortly.

When the Magi finally saw the child they worshiped him and presented him with the gifts of Gold ( a precious metal), Frankincense (a very expensive resin used in incense) and Myrrh (another expensive resin that can be used in incense, but is also used in the treatment of wounds and can be added to alcoholic beverages for flavor.)

The Magi then went to rest after their long journey.  The Bible then tells us that the Magi were warned in a dream that they were not to return to Herod.  They listened to the warning and went back home another way.

The foster father of Jesus was Joseph, a carpenter from Nazareth.  Joseph was also visited by an angel in a dream and he was told to take the child and leave Bethlehem and go to Egypt for Herod was looking to kill the boy.

Herod, when he found out that the Magi had betrayed him was furious, possibly to the point of madness. He gave orders that all male children in Bethlehem, and its districts, that were two years old and younger were to be killed.  He chose this age from some of the information that the Magi gave to Herod.  It is why that it is possible that the star rose at the birth of Jesus and it took the Magi two years to find him.

The Magi are never seen in history again.  There is speculation of where they went to after they left Bethlehem.  There are also stories and songs that fictionalize their trip.  For instance The Little Drummer Boy is about the visit of the Magi, and the song We Three Kings as well.

There can also be speculation about what happened to gifts the Magi brought with them.  As Joseph had to escape quickly to Egypt it is thought that the gifts the Magi brought financed the trip and the family’s stay in Egypt.  It would not be until Herod dies that Jesus, Mary and Joseph would be able to go home.

What can be learned from the story of The Epiphany?  Wisemen was also one of the alternate titles for the Magi. Since the Magi were learned men, at the very least the astronomers of their time they can also be called wise. In this day and age of computers and science and fast paced life styles, it’s good to remember the words that show up on different Christmas cards every year,” Wise men still seek him.”