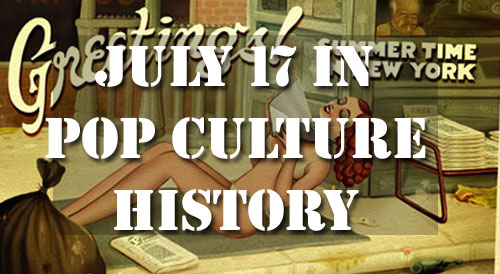 1429 – Charles VII of France was crowned the King of France in the Reims Cathedral after a successful campaign by Joan of Arc.

1899 – NEC Corporation is organized as the first Japanese joint venture with foreign capital. Today, NEC has structured its organization around three principal segments: IT solutions, network solutions and electronic devices.

1918 – Tsar Nicholas II of Russia and his immediate family were murdered by Bolshevik Chekists at the Ipatiev House in Yekaterinburg, Russia.

1838 – Douglas “Wrong Way” Corrigan entered aviation infamy and gained his nickname when he “accidentally” flew from New York to California but ended up in Ireland after being denied permission to cross the Atlantic by authorities.

1955 – Disneyland was dedicated and opened by Walt Disney in Anaheim, California.

1981 – A structural failure caused the collapse of a walkway at the Hyatt Regency in Kansas City, Missouri killing 114 people and injuring more than 200.

1987 – Robocop and Snow White and the Seven Dwarfs (re-issue) Jaws IV: The Revenge, Rita, Sue and Bob Too, Ping Pong and Good Morning, Babylon were released in theaters.

1989 – First flight of the Northrop B-2 Spirit Stealth Bomber.

1992 – Honey I Blew Up The Kid, a Stranger Among Us and Man Trouble debuted in theaters.

1998 – The Mask of Zorro was released in theaters.

2015 – Ant-Man and Trainwreck debuted in theaters.