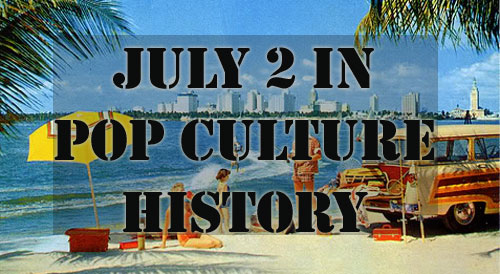 1776 – The Continental Congress adopted a resolution severing ties with the Kingdom of Great Britain, although the final wording of the formal Declaration of Independence was not approved until July 4.

1890 – The US Congress passes the Sherman Anti-Trust Act.

1897 – Guglielmo Marconi obtained his patent for radio in London.

1937 – Amelia Earhart and navigator Fred Noonan were last heard from over the Pacific Ocean while attempting to make the first equatorial round-the-world flight.

1937 – The Tomb of the Unknown Soldier has been guarded every minute since midnight July 2, 1937.

1939 – The First World Science Fiction Convention (Worldcon) was held in the Caravan Hall in New York from July 2 to July 4, 1939.

1964 – US President Lyndon B. Johnson signed the (Republican written) Civil Rights Act of 1964 meant to prohibit segregation in public places.

1982 – *Greatest Week in Movie History* – The week of July 2nd, 1982!
E.T. – The Extra Terrestrial, Rocky 3, Blade Runner, Poltergeist, John Carpenter’s The Thing, Star Trek 2 and Conan The Barbarian were all simultaneously playing at the cinema.

1982 – The Secret of NIMH was released in theaters.

1993 – The Firm, Son-in-Law and Snow White and the Seven Dwarfs (re-issue) debuted in theaters.

2002 – Steve Fossett became the first person to fly solo around the world (Australia to Australia ) nonstop in a balloon in just under two weeks.

2003 – Terminator 3: Rise of the Machines, Sinbad: Legend of the Seven Seas and Legally Blonde 2: Red, White and Blonde were released in theaters.

2008 – Hancock was released in theaters.

2014 – Tammy, Deliver Us From Evil and Earth to Echo debuted in theaters.