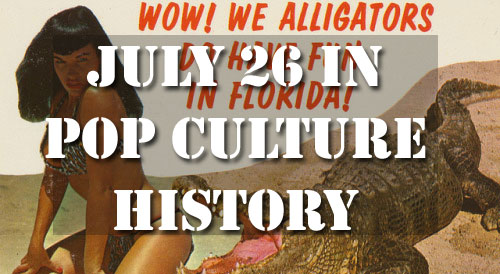 1745 – “The greatest cricket match that was played in this part of England was on Friday, the 26th of last month, on Gosden Common, near Guildford, between eleven maids of Bramley and eleven maids of Hambledon, all dressed in white. The Bramley maids had blue ribbons and the Hambledon maids red ribbons on their heads. The Bramley girls got 119 notches and the Hambledon girls 127. There was of bothe sexes the greatest number that ever was seen on such an occasion. The girls bowled, batted, ran and catches as well as most men could do in that game.”
– news report on the first recorded women’s Cricket Match.

1847 – Liberia disbanded from the support of American Colonization Society, and formalized their settlement as the Republic of Liberia.

1941 – US President Franklin D. Roosevelt ordered the seizure of all Japanese assets in the United States.

1963 – Syncom 2, the world’s first geosynchronous satellite, was launched from Cape Canaveral. It was used to telecast the 1964 Summer Olympics in Tokyo to the United States.

1971 – Launch of Apollo 15 on the first Apollo “J-Mission”, featuring the first use of a Lunar Roving Vehicle.

1985 – European Vacation, Kiss of the Spider Woman, The Heavenly Kid and The Black Cauldron debuted in theaters.

1990 – The Americans with Disabilities Act of 1990 was signed into law by President George Bush.

1991 – The Doctor, Mobsters, Life Stinks, Another You, My Mother’s Castle, The Dark Backward and V.I. Warshawski were released in theaters.

1996 – Kingpin, Supercop, The Adventures of Pinocchio and Joe’s Apartment debuted in theaters.

2000 – Thomas and the Magic Railroad was released in theaters.

2002 – Austin Powers in Goldmember and The Country Bears debuted in theaters.

2016 – Hillary Clinton became the first female nominee for President of the United States by a major political party at the Democratic National Convention in Philadelphia. #VictoriaWoodhull