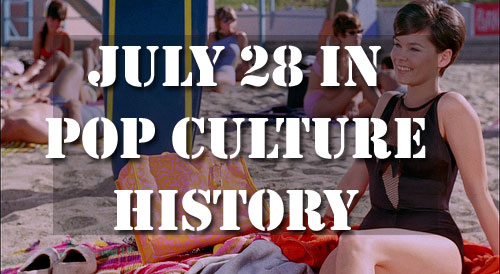 1854 – The USS Constellation, the last all-sail warship built by the United States Navy, was commissioned.

1868 – The 14th Amendment to the United States Constitution was certified, establishing African American citizenship and guaranteeing due process of law.

1896 – The city of Miami, Florida was incorporated.

1989 – Turner & Hooch, Babsr: The Movie, Distant Voices Still Lives, Catch Me If You Can and Friday the 13th Part VIII debuted in theaters.

1995 – Waterworld, Uperation Dumbo Drop and The Net were released in theaters.

1996 – The remains of the prehistoric Kennewick Man were discovered near Kennewick, Washington.

2000 – The Nutty Professor II: The Klumps debuted in theaters

2002 Nine coal miners trapped in the flooded Quecreek Mine in Somerset County, Pennsylvania, were rescued after 77 hours underground.

2004 – Garden State was released in theaters.

2006 – John Tucker Must Die and The Ant Bully debuted in theaters.