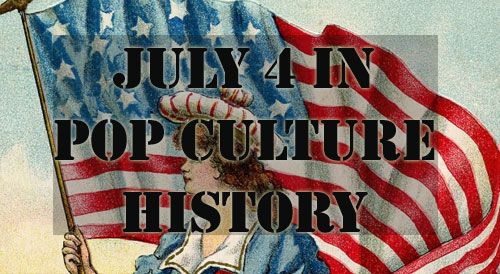 1054 – A supernova was seen for several months by Chinese, Arab near the star Zeta Tauri – its remnants form the Crab Nebula.

1776 – The United States’ Declaration of Independence is adopted by the Second Continental Congress.

1803 – The Louisiana Purchase was announced..

1855 – The first edition of Walt Whitman’s book of poems, Leaves of Grass, was published.

1862 – Lewis Carroll told 10-year-old Alice Liddell a story that was the basis for Alice’s Adventures in Wonderland, published in 1865.

1939 – Lou Gehrig, gave his famous “The luckiest man on the face of the earth” speech, and announced his retirement from major league baseball.

1946 – The Philippines gained full independence from the United States.

1951 – William Shockley announces the invention of the junction transistor.

1966 – US President Lyndon B. Johnson signed the Freedom of Information Act into United States law, effective in 1967.

1976 – The Clash performed publicly for the first time at The Black Swan, in Sheffield, England.

1986 – About Last Night…, Psycho III, Big Trouble in Little China, Under The Cherry Moon and The Great Mouse Detective debuted in theaters.

1987 – Former Gestapo chief Klaus “Butcher of Lyon” Barbie was convicted of crimes against humanity and sentenced to life imprisonment.

1997 – NASA’s Pathfinder space probe landed on the surface of Mars.

2004 – The cornerstone of the Freedom Tower was laid on the World Trade Center site in New York City.

2009 – The Statue of Liberty’s crown reopened to the public after eight years of closure due to security concerns following the September 11 attacks.

2012 – The discovery of particles consistent with the “God particle” – Higgs boson at the Large Hadron Collider were announced at CERN.