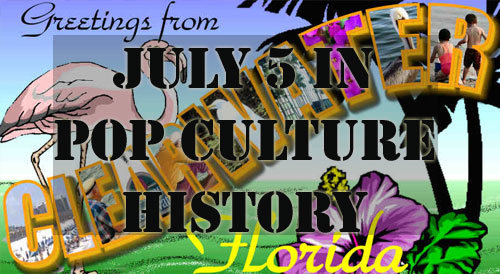 1865 – William Booth and his wife Catherine establish the Christian Mission, later known as the Salvation Army (1878).

1921 – Jury selection began for the Chicago White Sox players in a public trial in 1921 of “throwing” (lose intentionally) the 1919 World Series.

1937 – Spam (the luncheon meat, not the internet junk) was introduced into the market by the Hormel Foods Corporation.

1946 – French designer Louis Reard introduced the Bikini in Paris. He could not find a “respectable”Model to wear his creation so he had to hire a local Nude Dancer.

1950 – The Knesset passed the Law of Return which grants all Jews the right to immigrate to Israel.

1971 – The Twenty-sixth Amendment to the United States Constitution, lowering the American voting age from 21 to 18 years, was formally certified by President Richard Nixon.

1985 – The Emerald Forest and Red Sonja debuted in theaters.

1991 – Problem Child 2 and Slacker were released in theaters.

2012 – The Shard in London was inaugurated as the tallest building in Europe, with a height of 1,020 ft.