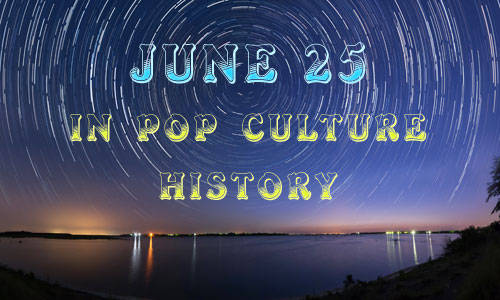 1910 – The US Congress passed the Mann Act, which prohibited interstate transport of females for “immoral purposes.”

1944 – The final page of the comic strip Krazy Kat was published, months after the author, George Herriman died.

1967 – The special Our World was the first live worldwide “via satellite” TV broadcast, transmitting to 30 countries via the BBC. The Beatles closed the show ith All You Need Is Love. Performers include Mick Jagger, opera singer Maria Callas, Vienna Boys’ Choir, Keith Richards, Keith Moon, Eric Clapton, Pattie Harrison, Jane Asher, Graham Nash, and others. The show lasted 2 and a half hours.

1978 – The rainbow flag, representing gay pride, was flown for the first time in the San Francisco Gay Freedom Day Parade.

1982 – Bladerunner and The Thing were released in theaters

1993 – Sleepless in Seattle and Dennis The Menace debuted in theaters

1996 – The Khobar Towers bombing in Saudi Arabia killed 19 US servicemen.

2004 – The Notebook was released in theaters

2009 – Michael Jackson died after suffering from cardiac arrest caused by a fatal combination of drugs given to him by his personal doctor, Conrad Murray.