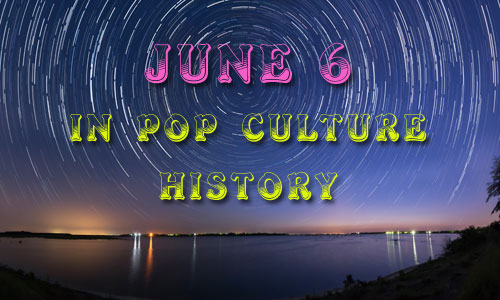 1844 – The Young Men’s Christian Association (YMCA) was founded in London.

1933 – America’s first drive-in opened near Camden, New Jersey, opened today. The first feature was a 1932 film, Wives Beware, and admission was 25 cents per car and an additional 25 cents per person. Richard Hollinghead got his patent (# 1,909,537 ) earlier that year.

1942 – The first parachute jump in the US using a nylon parachute was made by Adeline Gray, in Hartford, Connecticut.

1944 – D-Day: the day the Allied powers crossed the English Channel and landed on the beaches of Normandy, France, turning the tide of the war against Germany.

1948 – BBC Television began broadcasting again for the first time since 1939.

1964 – The Rolling Stones made their American TV debut on The Hollywood Palace.

1971 – The Ed Sullivan Show aired for the final time on CBS.

1997 – Farrah Fawcett made a bizarre appearance on the Late Show With David Letterman. She went on long tirades and story-telling sprees that made little to no sense and was distracted by blinking lights in the studio.

2002 – A near-Earth asteroid, estimated at 30 feet in diameter, exploded over the Mediterranean Sea between Greece and Libya.