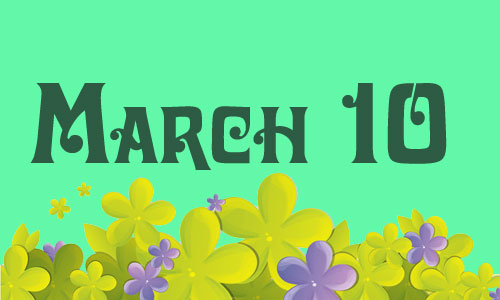 March 10 in Pop Culture History
1804 – In St. Louis, Missouri, a formal ceremony was conducted to transfer ownership of the Louisiana Territory from France to the United States, via the Louisiana Purchase.

1876 – Alexander Graham Bell spoke into his just-completed invention, the telephone. “Mr. Watson, come here. I want to see you.” It worked.

1906 – An underground fire sparked a massive explosion that virtually destroyed a vast maze of mines in Courrieres, France, that killed over 1,000 workers.

1926 – Lolly Willowes, or The Loving Huntsman, was the first Book-of-the-Month Club selection, published by Viking Press.

1955 – A US Patent (#2,704,172) was issued to Aaron S. Lapin for his invention of “Dispensing Valves for Gas Pressure Containers”. That may sound boring until you find out it was for his Reddi-Wip cream topping.

1978 – The Incredible Hulk premiered on CBS.

1989 – Police Academy 6: City Under Siege, The Adventures of Baron Munchausen and Chocolat were released in theaters.

1995 – Muriel’s Wedding and Outbreak were released in theaters.