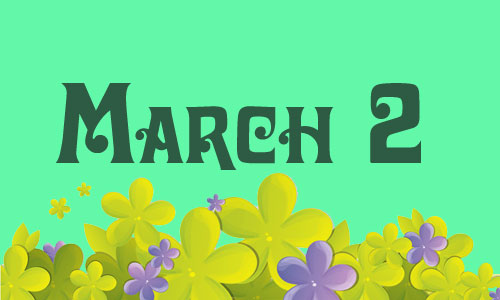 1807 – The US Congress passed an act to “prohibit the importation of slaves into any port or place within the jurisdiction of the United States… from any foreign kingdom, place, or country.”

1863 – The US Congress authorized a track width of 4-feet, 8-1/2 inches as the standard for the Union Pacific Railroad, which became the standard width for most of the world.

1940 – Elmer Fudd made his debut in the animated short Elmer’s Candid Camera.

1944 – Train #8017 stopped in a tunnel near Salerno, Italy, and more than 500 people on board suffocated and died. In the midst of WW II, the story was very much covered up by the Italian government.

1949 – The first round the world nonstop airplane flight was completed in a US Air Force B-50 Superfortress bomber, the Lucky Lady II headed by Captain James Gallagher. They landed back at Carswell Air Force base, Fort Worth, Texas, which they had left on February 26, about 94 hours earlier.

1960 – Lucille Ball filed for divorce from Desi Arnaz, ending their marriage as well as the Lucille Ball-Desi Arnaz Show franchise on CBS.

1962 – Wilt Chamberlain scored 100 points in a single basketball game against the New York Knicks. Final score: 169-147, at the Hershey Arena. Although there were only about 6,000 tickets sold, guesstimates are that almost 50% of male sports fans born in the Philadelphia area between 1925 and 1958 claim to have been at the event.

1969 – The Concorde SST Supersonic jet aircraft, prototype 001, made its first flight from Toulouse airport in France.

1983 – Compact discs and players are released for the first time in the United States and other markets. (They had previously been available only in Japan.)

1978 – Charlie Chaplin’s body was stolen from a cemetery in the Swiss village of Corsier-sur-Vevey, near Lausanne, Switzerland. The grave robbers (and the re-buried body) were found a few weeks later.

1984 – Repo Man, This is Spinal Tap and Against All Odds were released in theaters.

1990 – The Hunt for Red October was released in theaters.