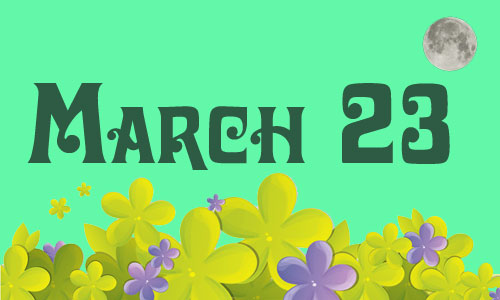 1775 – Patrick Henry delivered his ‘Give me liberty, or give me death!’ speech at St. John’s Episcopal Church, in Richmond, Virginia.

1839 – The initials ‘O.K.’ were first published in The Boston Morning Post. Meant as an abbreviation for ‘oll correct,’ a popular slang misspelling of ‘all correct’ at the time.

1840 – John William Draper took the first successful photo of the Moon. Actually, a daguerreotype, a precursor of the photograph.

1956 – Pakistan became the first Islamic republic in the world.

1983 – Dr. Barney C. Clark, the first recipient of a permanent artificial heart, died at the University of Utah’s Medical Center after 112 days with the device.

2001 – The Russian space station, Mir, ended 15 years in orbit by burning up entering Earth’s atmosphere, mostly burning up in the atmosphere, and splashing into the Pacific Ocean.