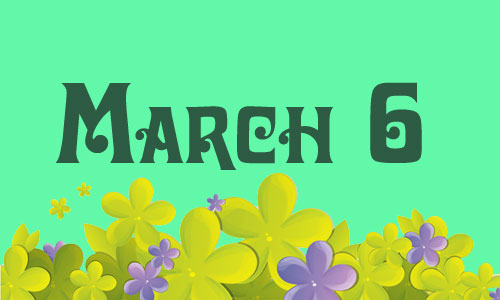 March 6 in Pop Culture History
Silly Putty was introduced as a toy March 6, 1950 by Peter Hodgson. But was invented in 1943 by James Wright, who was working for General Electric while trying to make synthetic rubber for the War Effort – it was in the middle of World War II.  A guy named Earl Warrick also claimed to invent it about the same time. Crayola owns the patent, they write the history, and they say it’s James. It was a terrible substitute for rubber, but became an interesting and strange gift…

1857 – The Supreme Court of the United States ruled in the Dred Scott v. Sandford case. It stated that anyone brought into the United States as a slave, or their descendants, could never be a United States citizen. The court of public opinion disagreed very vocally a few years later.

1899 – Bayer registered Aspirin as a trademark. Aspirin is considered by many to be the first wonder drug.

1943 – Norman Rockwell published Freedom from Want in The Saturday Evening Post with a matching essay by Carlos Bulosan as part of the ‘Four Freedoms Series.’

1950 – Silly Putty was introduced as a toy by Peter Hodgson. It was invented in 1943 by James Wright in an effort to make synthetic rubber.

1953 – James Watson and Francis Crick submitted to ‘Nature’ magazine their first article on the structure of DNA. It was published in the April 25th 1953 issue.

1987 – Lethal Weapon was released in theaters.

1998 – The Big Lebowski was released in theaters.

2001 – Napster began to block the transfer of copyrighted material over its peer-to-peer network. In July 2001, Napster shut down its entire network.