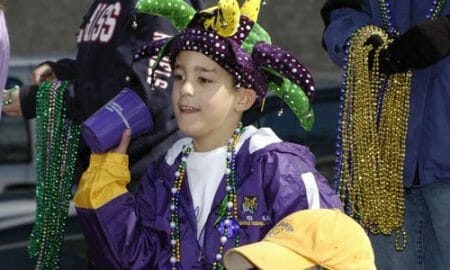 Mardi Gras is French for Fat Tuesday.  It refers to the Tuesday before Ash Wednesday when many Christians begin to fast for the 40 days leading up to Easter Sunday.
The feast of The Epiphany or The Three Kings closes the Christmas season and opens up a season of carnival.  In some countries these carnivals are ongoing with parades dances, feasts and other forms of merry making.  The last day of Carnival is Mardi Gras where feasting goes into full swing.  In England Mardi Gras is known as Shrove Tuesday, shrove means to confess.
Mardi Gras has always been a time of excess.  Rich and fattening foods have always been consumed, but in recent years it has become more of a party than the beginning of a religious time of self denial.  Here in America it has become a huge celebration in The City of New Orleans, where for several days of drinking eating and even lewd behavior is seen on the streets.  The Christian aspects have all but faded in these environments.
One tradition that was moved from one holiday to another is the king’s cake.  Originally this cake was made for the Feast of the Epiphany.  The cake is usually made with puff pastry with an almond filling.  A small plastic baby doll or coin or a ring is placed in the cake before baking.  The person finds the ring, doll or coin is made king of the feast.
The kings cake was undercoated for The Epiphany but for Mardi Gras, the cake is usually decorated with colored icing or sugars.
In many places the food star of the day is the donut.  Specific types of filled donuts are made for the day and consumed.  These types are generally only made for that day, and so are a special treat, much like The Candy Cane at Christmas.  Some really great co-workers may show up with a dozen assorted to mark the day.
Mardi Gras in the past was celebrated with much more formality.  In her book The Story Of The Trapp Family Singers Maria Von Trapp speaks of Mardi Gras before the second world war as a time of formal dinner and balls.  There would also be masquerades, but these too would be formal and at midnight everything would stop, the music, the dancing, the feasting would all end as the clock struck twelve.  The people would then gather and pray the Our Father and go home.  The party was finished and the fasting begun.